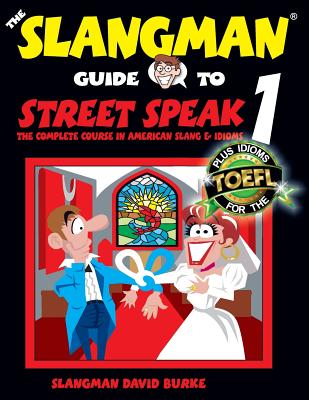 This is book number 1 in the Slangman Guides series.

The Slangman Guide to STREET SPEAK 1 takes you through the colorful and popular world of everyday American slang and idioms used by all native speakers of English in the US. It has been featured on CNN, BBC, Voice of America, and several other international TV broadcasts.

For ESL (English as a Second Language) students, this book equals years of living in the USA and will help you to quickly integrate into the American culture by learning not only the slang and idioms, but we'll also take you through the contractions and reductions used by everyone such as I dunno ("I do not know") and D'jeet jet? ("Did you eat yet?") and so many others.

Entertaining dialogues, activities and games will make sure you have a blast ("have fun") and don't sweat it ("get tense") as you get up to speed ("become current") on all the typical slang and idioms used by virtually every native speaker So chill out ("relax"), kick back ("get comfortable") as you learn the real language spoken by virtually all of us in the USA

The Slangman Guide to STREET SPEAK 1 contains popular chapters on slang and idioms associated with:

SLANGMAN DAVID BURKE Being brought up in a multi-lingual household, David Burke used his language skills as a tour guide at Universal Studios in Hollywood, California, giving tours in English, French, Italian, and sign language. His love of language inspired him to delve into the intricacies of words and led him to become a prominent author of more than 100 books on understanding slang and idioms in different languages, as well as books that teach kids foreign languages through fairy tales. His materials on slang and idioms are currently used as course curriculum by Berlitz International, UCLA, Harvard University, NYU and Hewlett Packard, and even by the writers of The Simpsons to give Bart his coolness. Having been trained since the age of four as a classical pianist, David became the in-house music director for the Los Angeles Olympic Organizing Committee where he composed and scored documentaries, commercials, and public service announcements featuring top stars in Hollywood. In 1986, David founded Slangman Publishing which specializes in materials that teach children foreign languages, as well as products teaching teens and adults slang and idioms in a variety of languages. In 1999, David became known as Slangman to an audience of over 250 million people in 120 countries due to his regular 6-year segment on Voice of America (VOA), the broadcast network of the United States government. Currently, David has fused all of his language, musical, and performing talents together to create HEY WORDY!, a children s TV show, which introduces children ages 3+ to the world of foreign languages and cultures in an environment of music, animation, and magic.