The Best Little Baseball Town in the World: The Crowley Millers and Minor League Baseball in the 1950s (Hardcover) 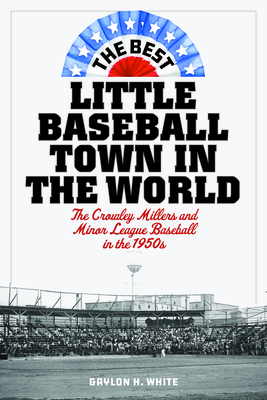 The Crowley Millers were the talk of minor league baseball in the 1950s, with crowds totaling nearly 10 times Crowley's population and earning Crowley the nickname of "The Best Little Baseball Town in the World." The Best Little Baseball Town in the World: The Crowley Millers and Minor League Baseball in the 1950s tells the fun, quirky story of Crowley, Louisiana, in the fifties, a story that reads more like fiction than nonfiction. The Crowley Millers' biggest star was Conklyn Meriwether, a slugger who became infamous after he retired when he killed his in-laws with an axe. Their former manager turned out to be a con man, dying in jail while awaiting trial on embezzlement charges. The 1951 team was torn to pieces after their young centerfielder was struck and killed by lightning during a game. But aside from the tragedy and turmoil, the Crowley Millers also played some great baseball and were the springboard to stardom for George Brunet and Dan Pfister, two Crowley pitchers who made it to the majors. Interviews with players from the team bring to light never-before-heard stories and inside perspectives on minor league baseball in the fifties, including insight into the social and racial climate of the era, and the inability of baseball in the fifties to help players deal with off-the-field problems. Written by respected minor-league baseball historian Gaylon H. White, The Best Little Baseball Town in the World is a fascinating tale for baseball fans and historians alike.

Gaylon H. White was a sportswriter for the Denver Post, Arizona Republic and Oklahoma Journal before working in the corporate world for nearly forty years. He is the author of The Bilko Athletic Club: The Story of the 1956 Los Angeles Angels (2014) and Singles and Smiles: How Artie Wilson Broke Baseball's Color Barrier (2018), and co-author with Ransom Jackson of Handsome Ransom Jackson: Accidental Big Leaguer (2016), all published by Rowman & Littlefield and featured on White's website, www.GaylonWhiteBaseball.com.