Crossing Borders: The Reconciliation of a Nation of Immigrants (Hardcover) 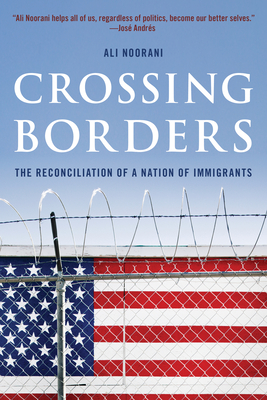 Advance praise from public figures Jos Andr's, Al Franken, Jonathan Blitzer of The New Yorker, and Russell Moore of Christianity Today. Find the moving stories of American immigrants and their journeys in Ali Noorani's chronicle. In an era when immigration on a global scale defines the fears and aspirations of Americans, Crossing Borders presents the complexities of migration through the stories of families fleeing violence and poverty, the government and nongovernmental organizations helping or hindering their progress, and the American communities receiving them. Ali Noorani, who has spent years building bridges between immigrants and their often conservative communities, takes readers on a journey to Honduras, Ciudad Juarez in Mexico, and Texas, meeting migrants and the organizations and people that help them on both sides of the border. He reports from the inside on why families make the heart-wrenching decision to leave home. Going beyond the polemical, partisan debate, Noorani offers sensitive insights and real solutions. Crossing Borders will appeal to a broad audience of concerned citizens across the political spectrum, faith communities, policymakers, and immigrants themselves.

Ali Noorani, President and CEO of the National Immigration Forum, an advocacy organization promoting the value of immigrants and immigration, is the author of There Goes the Neighborhood: How Communities Overcome Prejudice and Meet the Challenge of American Immigration. Noorani is a sought-after commentator, and has been interviewed by the New York Times, the Washington Post, the Economist, the Associated Press, and by several other national, regional, and international media. He is also a frequent guest on a range of television and radio shows, including MSNBC, the Lou Dobbs Show, the Bill O'Reilly Show, the Sean Hannity Show, Washington Journal, PBS Newshour, Fusion, NPR (the Diane Rehm Show, On Point, and Marketplace), and is an op-ed contributor to CNN.com, FoxNewsLatino.com, among others. Noorani is a regular guest on local talk radio shows across the country. He resides in Washington, DC. www.alinoorani.org Twitter: @anoorani Instagram: @alinoorani