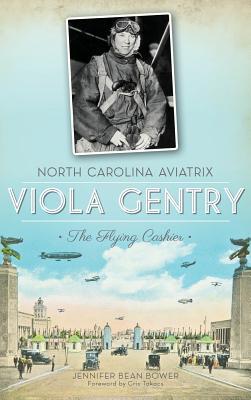 Viola Gentry of Rockingham County, North Carolina, learned to fly in 1924 and quickly achieved greater heights. In 1925, the aviatrix took her first solo flight. The following year, she flew under the Brooklyn and Manhattan Bridges, and in 1928, she established the first officially recorded women's solo endurance flight record. She became the first federally licensed female pilot from North Carolina that same year. She was a national celebrity, and her job in a New York restaurant secured her the nickname the "Flying Cashier." Gentry became personal friends with fellow pioneers of aviation Amelia Earhart, Wiley Post and General James "Jimmy" Doolittle. After a near-fatal crash, Gentry focused her efforts on championing aviation for women and preserving its early history. Author Jennifer Bean Bower reveals the life of one of the great women in Tar Heel State history.