Death & Lighthouses on the Great Lakes: A History of Murder and Misfortune (Murder & Mayhem) (Hardcover) 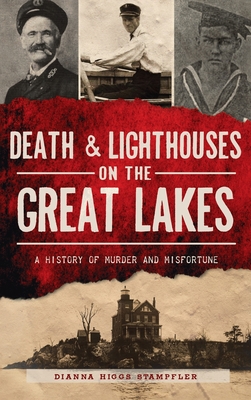 The author of Michigan's Haunted Lighthouses shares tales of disaster and misfortune on the Great Lakes.

Losing one's life while tending to a Great Lakes lighthouse sadly wasn't such an unusual occurrence. Death by murder, suicide or other tragic causes--while rare--were not unheard of. Two keepers on Lake Superior's Grand Island disappeared one early summer day in 1908, their decomposed remains found weeks later. A newly hired and some say depressed keeper on Pilot Island in Wisconsin's Door County slit his own throat after a consultation with a local butcher about the location of the jugular vein. A smallpox outbreak in the late 1890s led to the tragic death of a lighthouse hired hand on South Bass Island in Lake Erie.

Join author Dianna Stampfler as she uncovers the facts (and debunks some fiction) behind some of the Great Lakes' darkest lighthouse tales.