Faces at the Bottom of the Well: The Permanence of Racism (Paperback) 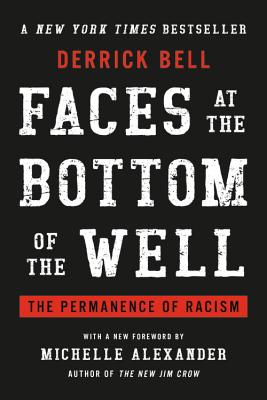 In Faces at the Bottom of the Well, civil rights activist and legal scholar Derrick Bell uses allegory and historical example—including the classic story "The Space Traders"—to argue that racism is an integral and permanent part of American society. African American struggles for equality are doomed to fail, he writes, so long as the majority of whites do not see their own well-being threatened by the status quo. Bell calls on African Americans to face up to this unhappy truth and abandon a misplaced faith in inevitable progress. Only then will blacks, and those whites who join with them, be in a position to create viable strategies to alleviate the burdens of racism.

Now with a new foreword by Michelle Alexander, author of The New Jim Crow, this classic book was a pioneering contribution to critical race theory scholarship, and it remains urgent and essential reading on the problem of racism in America.

Derrick Bell (1930-2011) was a civil rights attorney, pioneering legal scholar, professor, and political activist. A full-time visiting professor at New York University Law School for over two decades, he was previously the first tenured African American professor on the faculty of Harvard Law School and the first African American dean of the University of Oregon School of Law. He is also the author of And We Are Not Saved and several other books.

"Eerily prophetic, almost haunting, and yet at the same time oddly reassuring."—Michelle Alexander, from the Foreword

“Bell’s perspective retains its relevance. Even after his death, it has been far easier to disagree with him than to prove him wrong.”—Jelani Cobb, The New Yorker

"Derrick Bell, who is often described as the founder or godfather of critical race theory…. has been an important influence on some of today’s most influential writers on race, such as Ta-Nehisi Coates and Michelle Alexander…. For his supporters and critics alike, Derrick Bell remains a central figure. Nearly three decades after the publication of his most widely read book [Faces at the Bottom of the Well], his stark vision of the racial divide in American society and history has retained its power to provoke debate and activism across the political spectrum."—Wall Street Journal