America for Americans: A History of Xenophobia in the United States (Paperback) 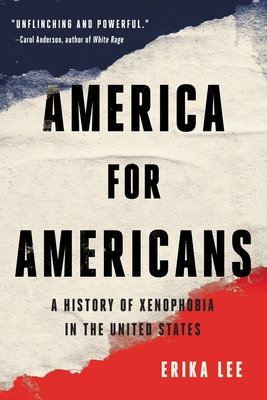 This definitive history of American xenophobia is "essential reading for anyone who wants to build a more inclusive society" (Ibram X. Kendi, New York Times-bestselling author of How to Be an Antiracist). The United States is known as a nation of immigrants. But it is also a nation of xenophobia. In America for Americans, Erika Lee shows that an irrational fear, hatred, and hostility toward immigrants has been a defining feature of our nation from the colonial era to the Trump era. Benjamin Franklin ridiculed Germans for their "strange and foreign ways." Americans' anxiety over Irish Catholics turned xenophobia into a national political movement. Chinese immigrants were excluded, Japanese incarcerated, and Mexicans deported. Today, Americans fear Muslims, Latinos, and the so-called browning of America. Forcing us to confront this history, Lee explains how xenophobia works, why it has endured, and how it threatens America. Now updated with an epilogue reflecting on how the coronavirus pandemic turbocharged xenophobia, America for Americans is an urgent spur to action for any concerned citizen.

Erika Lee is a Regents Professor, the Rudolph J. Vecoli Chair in Immigration History, and director of the Immigration History Research Center at the University of Minnesota, and President-Elect of the Organization of American Historians. The author of The Making of Asian America and other award-winning books, Lee lives in Minneapolis, MN.

"This
sweeping account draws parallels between Benjamin Franklin's worry over "swarthy" Germans "herding together" in the eighteenth century and Donald
Trump's race-baiting today. Xenophobia, Lee argues, has been an indelible "American tradition," deployed to social and political ends since the country's
founding. A manifesto as much as a history, the book shows how every large
immigrant group since Franklin's time-Irish, Chinese, Italian, Mexican, Middle
Eastern-was "scripted" by populist demagogues as alien and threatening."—The New Yorker

"Including everything from Chinese Exclusion to
recent travel bans, America for
Americans exposes the folly in arguments that position the U.S. as
an eternally anti-racist society."—Bustle

"She
persuasively expresses that current hostilities over national borders are no
exception to the nation's history. This clearly organized and lucidly written
book should be read by a wide audience."—Publishers Weekly

"A
carefully constructed history of wide interest to students of American
politics."—Kirkus Reviews

"Erika Lee wants us to remember that xenophobia has
always been a troubling part of the American narrative. Lee offers a sweeping
record of xenophobia in the U.S., highlighting the different ways minority
groups have been humiliated, discriminated against and even deported."—Time

"As Erika Lee brilliantly shows, xenophobia has forever been an integral part of American racism. Forcing us to confront this history as we confront its present, America for Americans is essential reading for anyone who wants to build a more inclusive society."—Ibram X. Kendi, New York Times-bestselling author of How to Be an Antiracist

"America for Americans is unflinching and powerful. Through extensive research and crystal clear prose, Erika Lee has masterfully tracked the phenomenon of xenophobia and its devastating effects on this nation's democracy and its people. Spurred on by unscrupulous politicians and key segments of the press, the cadence of fear, racism, and policy violence has rained down on immigrants since the colonial period and wreaked havoc on America's laws and claims of moral and human rights leadership. This is a must-read for all who need and want to understand how the 'leader of the free world' came to ban a religion, violate asylum laws, and lock babies in cages."—Carol Anderson, New York Times-bestselling author of White Rage

"Erika Lee's America for Americans is an insightful, thought-provoking book that helps us understand why the United States, a 'nation of immigrants,' could be the home to such longstanding and powerful anti-immigrant movements. Anyone who wants to fully understand why Americans are so divided over border walls, asylum policy, and sanctuary cities must read this outstanding book."—Tyler Anbinder, author of City of Dreams: The 400-Year Epic History of Immigrant New York

"America's xenophobic underbelly is laid bare by Erika Lee's meticulous chronicle, which begins well before 1776, when 'swarms' of Germans in the American colonies were labeled 'scum' and 'criminals,' and then details how those same hateful descriptions have been applied to Irish, Italians, Chinese, Japanese, Mexicans, Muslims, and others. This fascinating, timely, and important book makes it possible for us to stop repeating history and instead to build bridges based on our shared immigrant experiences."—Helen Zia, author of Last Boat out of Shanghai

"America for Americans is an intellectual tour de force wrapped in a vibrant, accessible narrative. Erika Lee reveals how hostility toward foreigners has profoundly influenced popular imagination and public policy, beginning with agitation over German settlers in early America. The exclusionist rhetoric, practices, and policies so prevalent today are nothing new, but echo back centuries of marking the boundaries of belonging. A timely, eloquent meditation on immigration, Lee's book demonstrates why history matters in understanding the contemporary resurgence of xenophobia and makes plain its shameful consequences (past and present) for individuals and the nation."—Vicki L. Ruiz, author of From Out of the Shadows: Mexican Women in Twentieth-Century America

"The most comprehensive and chilling history of anti-immigrant sentiment in America ever written. With narrative authority and analytic precision, Erika Lee shows how xenophobia has shaped America more than the ideals embodied by the Statue of Liberty. An indispensable and sobering guide to the politics of our own time."—Gary Gerstle, author of American Crucible: Race and Nation in the Twentieth Century

"A 'nation of immigrants,' America badly needs a history of xenophobia, and in America for Americans, Erika Lee delivers. By distinguishing nativism from xenophobia, she shows how Native Americans and Africans were transformed into foreigners and how that xenophobia fueled racist attacks against immigrants. Neither natural nor inevitable, xenophobia is always promoted by those who benefit from it, and in this courageous book, Lee names the beneficiaries."—Donna Gabaccia, emerita professor of history, University of Toronto