Behold, America: The Entangled History of "America First" and "the American Dream" (Hardcover) 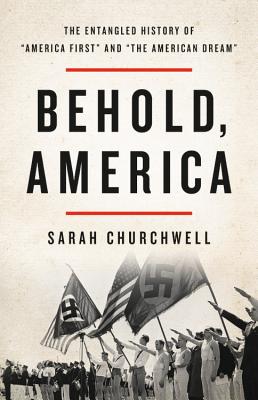 In Behold, America, Sarah Churchwell offers a surprising account of twentieth-century Americans' fierce battle for the nation's soul. It follows the stories of two phrases -- the "American dream" and "America First" -- that once embodied opposing visions for America.

Starting as a Republican motto before becoming a hugely influential isolationist slogan during World War I, America First was always closely linked with authoritarianism and white supremacy. The American dream, meanwhile, initially represented a broad vision of democratic and economic equality. Churchwell traces these notions through the 1920s boom, the Depression, and the rise of fascism at home and abroad, laying bare the persistent appeal of demagoguery in America and showing us how it was resisted. At a time when many ask what America's future holds, Behold, America is a revelatory, unvarnished portrait of where we have been.

Sarah Churchwell is professor of American literature and public understanding of the humanities at the University of London. The author and editor of several previous books, including the acclaimed Careless People: Murder, Mayhem, and the Invention of the Great Gatsby, she is a native of Chicago, now living in London.

"This is a timely book. It's also a provocative one... [Churchwell is] an elegant writer, and when 'America First'and 'the American dream'come head-to-head in her book during the run-up to World War II, the unexpected (and alarming) historical coincidences begin to resonate like demented wind chimes... Behold, America illuminates how much history takes place in the gap between what people say and what they do."—New York Times

"A fascinating new look at 'the entangled history' of 'America First' and 'the American Dream.'"—New York Magazine

"Churchwell has cast a wide net in her research, drawing into account not only politicians and pundits, but also journalists, novelists, ministers, and ordinary Americans. The result, appropriately enough, is a bit messy... But that messiness illustrates the ways in which these phrases have always been, as the historian Daniel Rodgers memorably put it, 'contested truths.'"—The Nation

"Lively and eminently readable.... Churchwell has produced a timely and clearly argued book that makes a clear case for the intellectual parallels between the first third of the 20th century and our won."—Financial Times

"Behold, America is an enthralling book, almost a primer for the ferocious dialectic of US politics, inspired by the events of 2015/16. It will no doubt take an influential place on a teeming shelf of Trump-lit. Much of its force derives from the echoes of the present it finds in the thunderous caverns of the past, blurred by the distortions of history. Passionate, well-researched and comprehensive, it is both a document of our times and a thrilling survey of a half-forgotten and neglected dimension of the American story."—Guardian (US edition)

"[A] fascinating history of the two intersecting tropes of modern America. ... The complex history of these two ideas, and the personalities of their various champions...is admirably told in Professor Churchwell's book."—Simon Winchester, New Statesman

"[A] bold first step towards the necessary reassessment of the American past in the light of Trumpism."—Eric Rauchway, Times Literary Supplement (UK)

"[A] richly engaging account of the expressions "the American Dream" and "America First"... Behold, America is enormously entertaining. Churchwell is a careful and sensitive reader, writes with great vigour and has a magpie's eye for a revealing story."—Dominic Sandbrook , Sunday Times

"The most intriguing aspect of the book is Churchwell's charting of how 'The American Dream' in the past connoted something less materialistic and more collective than is now the case... a fascinating history."—Independent

"In clear and graceful prose...[Churchwell's] book is a reminder that 'we do not have to accept others' narrow understanding of our meanings."—Publishers Weekly, starred review

"It's not exactly summery but then we're not exactly living in halcyon days, which is why my summer read recommendation this year is Sarah Churchwell's history of the two phrases 'America First' and 'The American Dream' in her excoriating, brilliant new book Behold, America. It lets us know where we are, and where America is right now, and exactly what kind of fascism is being sold to people all over again right now, and it does it with a combination of intelligence, grace, articulacy and clarity that gives off pure relief."—Ali Smith, The Big Issue (UK)

"Behold, America, like so much of the best historical enquiry, is rooted in an acute sensitivity to language. Chruchwell's primary concern is to unpack, from a trawl of the press, political speeches and literary works, what early 20th-century Americans meant by the common expressions 'America first' and 'the American Dream.' But the book is much more than a study of these catchphrases, and she deftly relates them to wider social, political and cultural developments."—Colin Kidd, Guardian (UK)

"Chruchwell's thoroughness in delineating America's decade-by-decade bigotry through primary sources from speeches to newspapers to novels is a marvel. But it is more than a history lesson. She's constructing the case for how the US elected Donald Trump, a catastrophe many of us struggle to understand."—Prospect (UK)

"Revealing...CHurchwell is well attuned to the nuances of this national conversation...[and] right to suggest that an important thread of American national identity has too often been quietened."—Literary Review (UK)

"Lifting up haunting voices that speak truth to the Trump era, Sarah Churchwell exposes a century-deep contest between egalitarian democracy and a quest to preserve corporate dominance and white rule under the banner of "America First." The climactic clash between the gutsy journalist Dorothy Thompson and the anti-Semitic aviator Charles Lindbergh reads like an anticipatory allegory for today's Resistance to the heirs of Lindbergh's authoritarian vision."—Nancy MacLean, author of Democracy in Chains: The Deep History of the Radical Right's Stealth Plan for America

"If we're to ever exorcise America's past demons, we'll first have to learn from them. Churchwell's Behold, America is a vital and unflinching look at our country's inherent contradictions that have hampered our aspirations since its founding. Bold, fearless, and above all beautifully written, this book is a must-read for anyone looking to understand our past, present, and future."—Jared Yates Sexton, author of The People Are Going to Rise Like the Waters Upon Your Shore