We See It All: Liberty and Justice in an Age of Perpetual Surveillance (Hardcover) 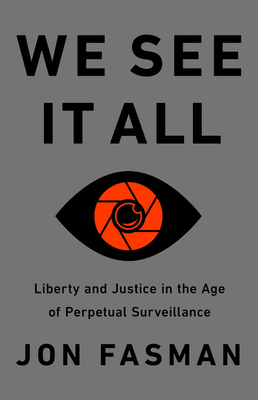 This investigation into the legal, political, and moral issues surrounding how the police and justice system use surveillance technology asks the question: what are citizens of a free country willing to tolerate in the name of public safety?

As we rethink the scope of police power, Jon Fasman’s chilling examination of how the police and the justice system use the unparalleled power of surveillance technology—how it affects privacy, liberty, and civil rights—becomes more urgent by the day. Embedding himself within police departments on both coasts, Fasman explores the moral, legal, and political questions posed by these techniques and tools.

By zeroing in on how facial recognition, automatic license-plate readers, drones, predictive algorithms, and encryption affect us personally, Fasman vividly illustrates what is at stake and explains how to think through issues of privacy rights, civil liberties, and public safety. How do these technologies impact how police operate in our society? How should archaic privacy laws written for an obsolete era—that of the landline and postbox—be updated?

Fasman looks closely at what can happen when surveillance technologies are combined and put in the hands of governments with scant regard for citizens’ civil liberties, pushing us to ask: Is our democratic culture strong enough to stop us from turning into China, with its architecture of control?

Jon Fasman is the Washington correspondent of the Economist, having previously been South-East Asia bureau chief and Atlanta correspondent. In addition to his work for the Economist, he is also the author of two novels, both published by The Penguin Press: The Geographer's Library, was a New York Times bestseller in 2005 and has been translated into more than a dozen languages; and The Unpossessed City, which was published in autumn of 2018, was a finalist for the New York Public Library's Young Lions Fiction Award. Fasman resides in Westchester County, N.Y.

"If you want to understand the stakes and the landscape of surveillance in your life—yes, yours right now—We See It All is an outstanding place to start. Fasman walks his readers through a meticulously balanced review of how police, corporations, local businesses, governments, and ordinary people conspire to exchange real privacy for the feeling of safety. An evocative storyteller, Fasman lays out his case that, because government regulation lags impossibly behind technological advances, the only salve for our predicament is collective awareness. And collective action. The writing is sober and sobering. And, though the recent fires of Minneapolis, Atlanta, Portland, and the nation have not centered squarely on surveillance, Fasman argues convincingly that the next ones very well might."—Phillip Atiba Goff, co-founder and CEO of the Center for Policing Equity and professor of African American studies and psychology at Yale University

"This powerful, engrossing book will challenge your assumptions about persistent surveillance. Jon Fasman makes a clear case for civil liberties and explains how our laws and public safety infrastructure must keep pace with the advancement of technology. It's a must-read for anyone interested in the future and the unintended consequences of artificial intelligence, data, encryption and recognition technology." —Amy Webb, founder of The Future Today Institute, author of The Big Nine and The Signals are Talking

“Jon Fasman has given us a stellar account of the use of surveillance technologies by the police. It’s comprehensive, even-handed, informative, and fun to read."—Barry Friedman, Jacob D. Fuchsberg Professor, New York University School of Law

"An urgent examination of police-state intrusions on the privacy of lawful and law-abiding citizens."—Kirkus Reviews