Gunfight: My Battle Against the Industry that Radicalized America (Hardcover) 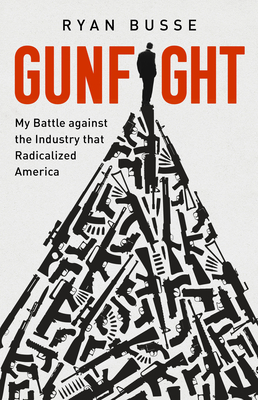 A former firearms executive pulls back the curtain on America's multibillion-dollar gun industry, exposing how it fostered extremism and racism, radicalizing the nation and bringing cultural division to a boiling point.

As an avid hunter, outdoorsman, and conservationist–all things that the firearms industry was built on–Ryan Busse chased a childhood dream and built a successful career selling millions of firearms for one of America’s most popular gun companies.

But blinded by the promise of massive profits, the gun industry abandoned its self-imposed decency in favor of hardline conservatism and McCarthyesque internal policing, sowing irreparable division in our politics and society. That drove Busse to do something few other gun executives have done: he's ending his 30-year career in the industry to show us how and why we got here.

Gunfight is an insider’s call-out of a wild, secretive, and critically important industry. It shows us how America's gun industry shifted from prioritizing safety and ethics to one that is addicted to fear, conspiracy, intolerance, and secrecy. It recounts Busse's personal transformation and shows how authoritarianism spreads in the guise of freedom, how voicing one's conscience becomes an act of treason in a culture that demands sameness and loyalty. Gunfight offers a valuable perspective as the nation struggles to choose between armed violence or healing.

Ryan Busse is a former firearms executive who helped build one of the world’s most iconic gun companies, and was nominated multiple times by industry colleagues for the prestigious Shooting Industry Person of The Year Award. Busse is an environmental advocate who served in many leadership roles for conservation organizations, including as an advisor for the United States Senate Sportsmen's Caucus and the Biden Presidential Campaign. These days, Ryan provides consulting services to progressive organizations with the aim to undo the country's dangerous radicalization. He remains a proud outdoorsman, gun owner, father and resident of Montana.

“With Gunfight, Busse, who said he left the industry voluntarily in 2020, stands out because he is one of the few insiders to speak publicly, and critically, about the insular culture of gun companies.”—The New York Times

“Already called one of the most important books about guns in America ever written, it has placed Busse on a metaphorical firing line and is stirring up conversation nationally. No matter where one comes down on right-to-bear-arms issues, Gunfight ought to be a part of your reading list.”—Mountain Journal

“Busse’s story will challenge many readers, and enrage some as well, but the vehemence of this rage serves to prove his point: Too many people in our country have been pushed to such extreme positions that any utterance of an uncomfortable truth regarding what gun culture has become is often met with instant, harsh condemnation. And as the author convincingly argues, it’s an uncomfortable truth we need to hear and heed.”—Big Sky Journal

“[A] valuable insider account… Busse’s insights into the connections between politics and profit are genuinely eye-opening. This is an incisive look at how and why one of America’s deepest partisan divides got that way.” —Publishers Weekly

“[A] startling insider’s account of how the firearms industry struck a Faustian bargain with extremism for profit…Busse portrays his years in the industry lucidly, and his anger regarding its wrong turns and destructive influence seems genuine…  Sure to elicit controversy, this is a worthwhile addition to a volatile, necessary discussion.”—Kirkus

“Ryan Busse presents a fascinating, clear-eyed account of the gun industry’s slide into extremism. Gunfight is an important book for anyone seeking to understand how our country’s debate over the role of guns and gun laws in our society has become so bitter and fraught. I was left with a sense of hope that there is a path forward; one where the majority of Americans, including the majority of gun owners, stand up to the gun lobby's bullying and demand lasting change.”—Former Congresswoman Gabby Giffords

“Ryan Busse is a gun enthusiast, conservationist, and defender of our Second Amendment. This is a must-read book for anyone who wants to understand how a wholesome part of America was twisted to radicalize wide swaths of our country, and its all wrapped up in a wild-ride story that you can't put down.”—Steve Bullock, two-term Montana Governor

“Gunfight is a riveting account of how special interests have perverted the Second Amendment to create a culture of gun extremism that's radicalized a vocal minority. But gun owners like Ryan Busse are taking back the narrative from extremists who are trying to use guns to undermine our democracy.”—Shannon Watts, founder of Moms Demand Action

“Woven through this riveting personal story is a message for millions of reasonable Americans who are not happy with being branded and manipulated by the political extremes. Gunfight reveals the truth about the roots of our national division, and many people will see themselves in Busse’s resistance to extremism. Ryan Busse is ready to lead that fight.”—Jon Tester, three-term Montana Democratic Senator and author of Grounded: Lessons from Rural America

“I'm a proud father, gun owner, and bird dog trainer. But I am also the feared outsider because I am an African American man. Gunfight is the essential truth of America’s radicalized gun culture, and I could not put it down because people like me navigate these hard issues every day. We’ve been waiting for someone like Ryan Busse to come along beside us. Finally, we have an honest and gripping story that will be a catalyst for real change.”—Durrell Smith, educator, artist, author, founder of Minority Outdoor Alliance, and award-winning host of the GunDog Notebook podcast

“After two decades covering America’s gun nightmare, what I’ve really come to crave is intel on our adversary. Enter Ryan Busse, a Big Gun executive with a harrowing personal story from deep inside the industry. A riveting account of what drives this belligerent force, and insights into how to temper it.”—Dave Cullen, author of Columbine and Parkland

“Gunfight is a wild ride you can’t put down.  More importantly, it is an illuminating, insider account of the 25-year radicalization of much of the Republican party with guns - and the myths the industry sells about them - at the center of the story.  Anyone concerned about the rise of extremism that brought about the January 6th insurrection should read Ryan Busse's brave book."—Jennifer Palmieri, former White House Communications Director, author of the #1 New York Times bestseller, Dear Madam President

“Busse’s story is an incredible read, but it also shines a light on how guns have been used to divide this country. This is not a gun book, but rather it is the enthralling personal story detailing how our nation came to be divided.”—Martin Heinrich, two-term New Mexico Democratic Senator and former congressman

“Ryan Busse has ripped the curtain away from the firearms industry, revealing it to be the dark enabler of antigovernment conspiracies, racism, and the armed radicalization of the far right. Gun manufacturers supplied not only the guns, but the explosive ideological fuel that has led America to the brink of civil disorder. Busse has performed an inestimable service and, by the way, tells a riveting tale.”—Robert Spitzer, distinguished service professor of political science, the State College of New York, and author of more than 700 articles and four books on gun politics including eight editions of The Politics of Gun Control