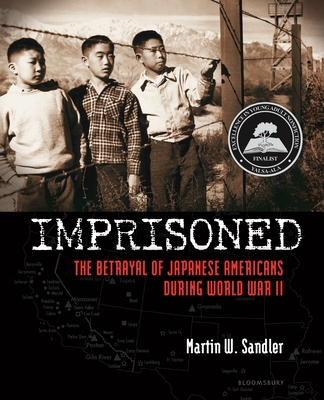 While Americans fought for freedom and democracy abroad, fear and suspicion towards Japanese Americans swept the country after Japan's sneak attack on Pearl Harbor. Culling information from extensive, previously unpublished interviews and oral histories with Japanese American survivors of internment camps, Martin W. Sandler gives an in-depth account of their lives before, during their imprisonment, and after their release. Bringing readers inside life in the internment camps and explaining how a country that is built on the ideals of freedom for all could have such a dark mark on its history, this in-depth look at a troubling period of American history sheds light on the prejudices in today's world and provides the historical context we need to prevent similar abuses of power.

Martin W. Sandler is the author of Imprisoned, Lincoln Through the Lens, The Dust Bowl Through the Lens, and Kennedy Through the Lens. He has won five Emmy Awards for his writing for television and is the author of more than sixty books, two of which have been nominated for the Pulitzer Prize. Among Sandler's other books are the six volumes in his award-winning Library of Congress American History Series for Young People, a series which has sold more than 500,000 copies. Other books by Mr. Sandler include: Island of Hope: The Story of Ellis Island, Trapped in Ice, The Story of American Photography, The Vaqueros, America: A Celebration, and This Was America. Mr. Sandler has taught American history and American studies at the University of Massachusetts at Amherst and at Smith College, and lives in Massachusetts.

“YALSA Award for Excellence in Nonfiction for Young Adults finalist” —:

“Beautifully illustrated with well-chosen photographs and other documents, this handsome book offers a clear view of an episode in American history that still receives too little focus.” —Booklist, starred review

“PRAISE FOR LINCOLN THROUGH THE LENS” —:

“*"Although it's the pictures that provide the 'wow factor,' Sandler's perceptive words have their own elegance."” —Booklist, starred review

“*"This appealing, accessible title will be savored from beginning to end."” —School Library Journal, starred review

“PRAISE FOR THE DUST BOWL THROUGH THE LENS” —:

“*"Seldom has the connection between the arts and the general quality of life been made so clear."” —School Library Journal, starred review

“PRAISE FOR KENNEDY THROUGH THE LENS
” —:

“An accessible, insightful perspective on one of America's most famous presidents.” —Kirkus Reviews