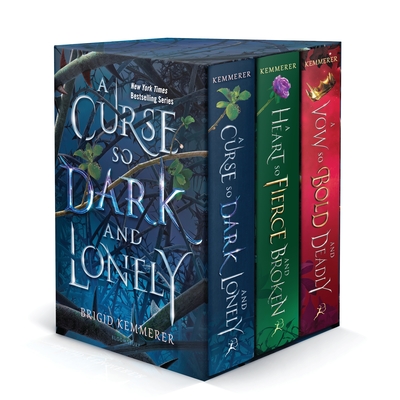 Discover the global phenomenon of the Cursebreaker series in this gorgeous three-book hardcover box set!

Deep in the heart of Emberfall sits an isolated castle. Inside, Prince Rhen is trapped by a curse; outside, his kingdom falls to ruin.

On the dark streets of Washington DC, Harper waits, playing lookout for her brother. She's always been underestimated because of her cerebral palsy, but when she sees someone in danger she runs to help--only to find herself sucked into Rhen's cursed world.

What begins as a twist on a fairy tale unfolds into a world of magic, danger, love, and betrayal in Brigid Kemmerer's New York Times bestselling Cursebreaker series.

This box set includes hardcover editions of the entire series: A Curse So Dark and Lonely, A Heart So Fierce and Broken, and A Vow So Fierce and Deadly.

Brigid Kemmerer is the author of the New York Times bestselling Cursebreaker series, which includes A Curse So Dark and Lonely, A Heart So Fierce and Broken, and A Vow So Bold and Deadly. She has also written the contemporary young adult romances Call It What You Want, More Than We Can Tell, and Letters to the Lost, as well as paranormal young adult stories, including the Elemental series and Thicker Than Water. A full-time writer, Brigid lives in the Baltimore area with her family.

“Has everything you'd want in a retelling of a classic fairy tale: a finely-drawn fantasy world, a heroine rarely seen in fiction, and a tortured hero with a secret.” —Jodi Picoult, New York Times bestselling author of A SPARK OF LIGHT and SMALL GREAT THINGS, on A CURSE SO DARK AND LONELY

“Absolutely spellbinding.” —Stephanie Garber, #1 New York Times bestselling author of CARAVAL and LEGENDARY, on A CURSE SO DARK AND LONELY

“I couldn't get this creative, suspenseful take on 'Beauty and the Beast' out of my head.” —Sara Holland, New York Times bestselling author of EVERLESS, on A CURSE SO DARK AND LONELY

“Fans of Cassandra Clare, Marissa Meyer, or Alex Flinn, as well as any reader looking to sink into a top-notch story with great characters, will want to read this book.” —VOYA, starred review, on A CURSE SO DARK AND LONELY

“A complex, creative, and compelling reimagining of Beauty and the Beast.
” —School Library Connection, starred review, on A CURSE SO DARK AND LONELY