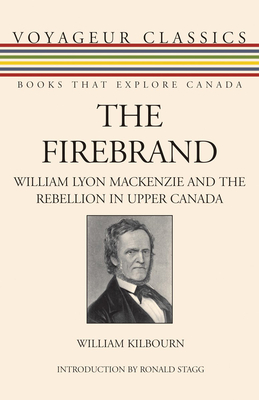 This touching, frequently hilarious book was originally published by Clarke, Irwin in 1956 and remained in print through numerous reprintings and editions for several decades, garnering praise such as The Firebrand is a major step on the path to nationhood (Globe and Mail).

William Kilbourn (1926-1995) was a noted author, activist, and Toronto politician. He was a Toronto alderman and the founding chairman of the Humanities Division at York University. His books include Toronto Observed: Its Architecture, Patrons, and History and Toronto Remembered: A Celebration of the City. Ronald Stagg is the chair of the Department of History at Ryerson University in Toronto and is the co-author of The Upper Canada Rebellion of 1837.

"William Kilbourn was a first rate historian and a gifted storyteller. Using a combination of primary and secondary sources, he takes the reader back to Upper Canada in the 1820s and 30s. In his hands, Mackenzie and the Family Compact members come to life ... Kilbourn's book could be used as a text or for creational reading. Originally published in 1956, it has a new introduction written by historian Ronald Stagg who helped co-edit a book of documents on the 1837 rebellion. Highly Recommended."