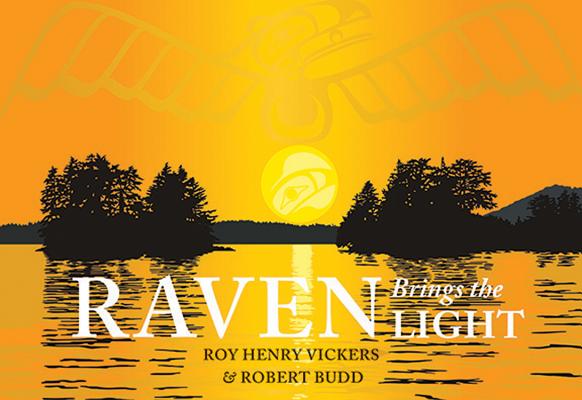 In a time when darkness covered the land, a boy named Weget is born who is destined to bring the light. With the gift of a raven's skin that allows him to fly as well as transform, Weget turns into a bird and journeys from Haida Gwaii into the sky. There he finds the Chief of the Heavens who keeps the light in a box. By transforming himself into a pine needle, clever Weget tricks the Chief and escapes with the daylight back down to Earth.

Vividly portrayed through the art of Roy Henry Vickers, Weget's story has been passed down for generations. The tale has been traced back at least 3,000 years by archeologists who have found images of Weget's journey in petroglyphs on the Nass and Skeena rivers. This version of the story originates from one told to the author by Chester Bolton, Chief of the Ravens, from the village of Kitkatla around 1975.

Roy Henry Vickers is a renowned carver, painter and printmaker whose Eagle Aerie Gallery in Tofino, BC, has become a provincial landmark. In 1998, Roy was appointed to the Order of British Columbia and in 2006, the Order of Canada. He is the co-author of the immensely popular Northwest Coast Legends series and the author of several books that showcase his art, including Storyteller (Harbour Publishing, 2014). He currently lives in Hazelton, BC.

Robert (Lucky) Budd holds an MA in history and has digitized many high-profile oral history collections including that of the Nisga'a First Nation. As well as co-authoring the Northwest Coast Legends series, he is the author of Voices of British Columbia (Douglas & McIntyre, 2010), a bestseller that was shortlisted for the 2011 Bill Duthie Booksellers' Choice Award, and its sequel, Echoes of British Columbia (Harbour Publishing, 2014). He currently lives in Victoria, BC.