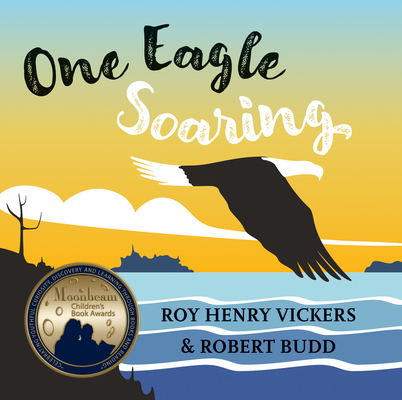 This is book number 2 in the First West Coast Books series.

Following on the success of their bestselling board bookHello Humpback!, the celebrated and award-winning authors Roy Henry Vickers and Robert Budd are back withOne Eagle Soaring, the second volume in their exciting new series, First West Coast Books.One Eagle Soaring, a first numbers book, explores counting and numbers with the help of West Coast animalsfrom a single eagle aloft, to a pair of swimming whales, as well as leaping frogs, honey-hungry bears and a group of ten dozing marmots. Combining Roy Henry Vickers vivid illustrations, a glossy tactile finish and a simple yet catchy text, this sturdy board book introduces babies and toddlers to the spectacular scenery and wildlife of BritishColumbia.

Roy Henry Vickers is a renowned carver, painter and printmaker. He is the co-author of Harbour Publishing’s popular children’s Northwest Coast Legends series, all of which were shortlisted for the Bill Duthie Booksellers’ Choice Award: Raven Brings the Light in 2014, Cloudwalker in 2015, Orca Chief in 2016 and Peace Dancer in 2017. He lives in Hazelton, BC.

Robert (Lucky) Budd is the co-author of the Northwest Coast Legends series and the author of Voices of British Columbia (Douglas & McIntyre, 2010), which was shortlisted for the 2011 Bill Duthie Booksellers’ Choice Award, and its sequel, Echoes of British Columbia (Harbour Publishing, 2014), which won second prize in the BC Historical Federation’s writing competition in 2014. He lives in Victoria, BC.