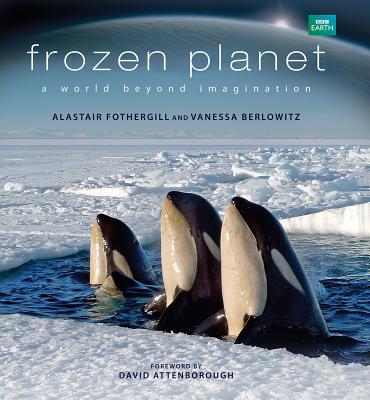 The ultimate portrait of the earth's Polar Regions.

In 2012 the Discovery Channel will broadcast Frozen Planet, the long-awaited third installment in the BBC Earth series of which Blue Planet: Seas of Life and Planet Earth: As You've Never Seen It Before won multiple Emmy awards.

Frozen Planet is the companion book to the TV series. It follows the world's best wildlife photographers as they capture animal behavior and landscapes never seen before, including Antarctica's active volcanoes and the previously restricted Russian Arctic. Custom-designed HD cameras allowed undisturbed observation. Traveling by nuclear submarine, military helicopter, icebreaker and snowmobile, the filmmakers endured piercing polar winters and the dangerous summer melt to record what may be the dying days of Earth's frozen regions.

It follows four polar residents that reveal the health of the planet and what the future may hold: the polar bear and arctic fox in the north; the Adelie penguin and wandering albatross in the south. Behind the scenes segments describe the making of the TV series.

Some of the fascinating stories are:

Sales of the companion book to the Blue Planet television series topped 6 million dollars. Frozen Planet promises to be an equal or greater success. The important topic, the expected demand from Discovery Channel viewers and an excellent price make it an essential purchase.

Alastair Fothergill was the executive producer of Frozen Planet, and also produced Planet Earth and The Blue Planet for the BBC. Alastair studied zoology at the University of Durham, and is the author of four books. Vanessa Berlowitz was the series producer of Frozen Planet and director and producer of the 'Ice worlds' and 'Mountains' episodes for Planet Earth. Vanessa studied human sciences at the University of Oxford, and has also contributed to a number of books and written on wildlife and conservation for magazines.