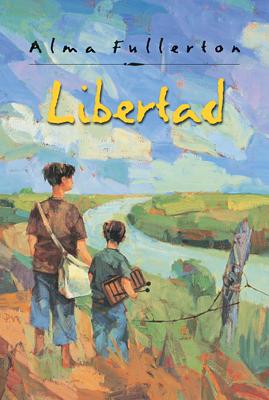 With their father gone to America to make money for his family, Libertad, his little brother Julio and their mother scrape a living out of a dump in Guatemala City. Although it is too late for him, Libertad is determined that his little brother should go to school. Taught to play the marimba by his father, Libertad uses his talent as a street musician to raise enough money for his brother's school supplies. But his dreams for their future are destroyed when their mother is killed in a freak accident. Libertad must face the inevitable truth; they cannot survive on the streets of Guatemala City alone. There is only one thing to do. They must set out on the long and lonely journey to the Rio Grande River, where they plan to cross the water and enter the United States to find their father.

A moving story about determination and hope, Libertad is a stunning free verse novel by the author of In the Garage and Walking on Glass.

Alma Fullerton was born in Ottawa, Ontario. She is the author of In the Garage and Walking on Glass. She resides in Midland, Ontario, with her husband and two daughters, juggling real life with her passion for literature for youth.

"Young people of all ages will be intrigued and affected emotionally by this exceptional story."
-- "Winnipeg Free Press"

"Alma Fullerton creates two characters who wend their way into the reader's heart with a story that will have even the most reluctant reader forging forward with them to a better future."
-- "The Brandon Sun"

"The suspense is real and though readers may question some of the choices Libertad makes along the way, they will celebrate his perseverance and ultimate success. With realistic detail and well-paced suspense, this survival story is a good choice for reluctant readers."
-- "The School Library Journal"

"The spare free verse is uneven but still packed with heartrending images of desperation and squalid poverty that will be eye-opening to young readers. Libertad's fierce love for his brother is deeply moving and based on the story of a real boy's journey combined with other children's actual experiences. Although there are some contrivances and loose ends, this short yet evocative tale will attract readers."
-- "Booklist"