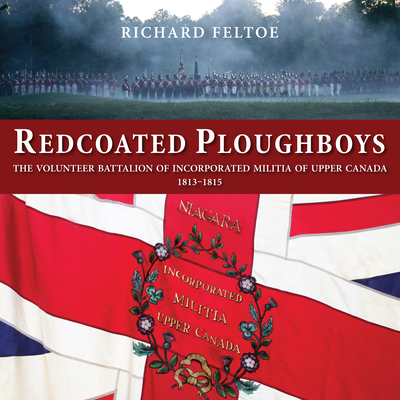 Redcoated Ploughboys brings the story of the Battalion of Incorporated Militia of Upper Canada to life, revealing a fascinating lost chapter in military history.

In 1812, the future of British North America hung in the balance as the United States declared war with the avowed goal of conquering the Canadas and removing British influence from the continent forever.

In response, a corps of men, drawn from every walk of life and social stratum of Upper Canada, stepped forward to defend their fledgling colony by volunteering to serve in the Battalion of Incorporated Militia of Upper Canada. After undergoing rigorous training, and fighting with distinction in numerous skirmishes and battles, it earned the prestigious battle honour Niagara. The regiment was disbanded at the conclusion of the war, and with the passage of time, its dedicated service and efforts have faded into the dust of histories written about the War of 1812.

Redcoated Ploughboys brings the story of this regiment, and the men who served in it, back to life, revealing a fascinating lost chapter in Canada's early military history.

Richard Feltoe was born in Newcastle-upon-Tyne and holds a degree in economics from the University of London . He is the curator and corporate archivist for Redpath Sugar Limited and is active as a living history reenactor, re-creating the life of a Canadian militia soldier from the War of 1812. He lives in Brampton, Ontario.

With a labour of love like Feltoe’s Redcoated Ploughboys, there is a difficult balance between presenting enough general information to inform the non-historian, enough specific content to interest the historian and enough context so that both understand how your specific observations fit into a larger narrative. I’m happy to say that Feltoe achieves it.”