All Who Go Do Not Return: A Memoir (Paperback) 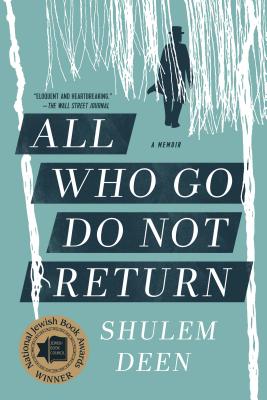 Shulem Deen was raised to believe that questions are dangerous. As a member of the Skverers, one of the most insular Hasidic sects in the US, he knows little about the outside world—only that it is to be shunned. His marriage at eighteen is arranged and several children soon follow. Deen's first transgression—turning on the radio—is small, but his curiosity leads him to the library, and later the Internet. Soon he begins a feverish inquiry into the tenets of his religious beliefs, until, several years later, his faith unravels entirely. Now a heretic, he fears being discovered and ostracized from the only world he knows. His relationship with his family at stake, he is forced into a life of deception, and begins a long struggle to hold on to those he loves most: his five children. In All Who Go Do Not Return, Deen bravely traces his harrowing loss of faith, while offering an illuminating look at a highly secretive world.

Shulem Deen is a former Skverer Hasid, and the founding editor of Unpious. His work has appeared in the The Jewish Daily Forward, Tablet, and Salon. He lives in Brooklyn, New York.

“Astonishing. . . . Deen's harrowing story . . . is also an indictment of those who are standing by and allowing it to be.” —The Washington Post

“With this book Deen has laid to rest the idea that a Hasid from New Square could never become a great writer in English, or an articulate chronicler of his own experiences.” —The New Republic

“All Who Go Do Not Return is an extraordinary memoir. The writing is beautiful. The journey it chronicles is poignant, relatable-and also unlike anything most readers will ever have experienced. . . . His voice is an important one in our generation.” —ZEEK

“A heartbreaking read as Deen fights to reconcile his identity and love for his family with his loss of faith in God. But it is also one of great courage and hope as Deen aspires to live openly and without fear for the first time.” —Publishers Weekly

“In this moving book, Deen lays bare his difficult, muddled wrestling with his faith, the challenges it posed to everything he thought he knew about himself, and the hard-won redemption he eventually found.” —Library Journal

“A clash of cultures made fascinating and personal.” —Booklist

“I understand that even if I did visit New Square I would have no greater access to Hasidic life than my occasional walk through Williamsburg, where I can see but can't penetrate its appeal, or its secrets. Deen's memoir, however, does grant me that access. It is the book's ticket to mass appeal as well as the seat of his disquiet in its writing.Though he writes because he has a story to tell, Deen's work, especially in his memoir, is clearly crafted to benefit others dealing with a wavering faith.” —Tablet Magazine

“Shulem Deen has a fascinating story to tell, and he tells it with exquisite sensitivity. All Who Go Do Not Return gives us not only an insider's glimpse into a shrouded world few outsiders get to see, but also a movingly told narrative of one man's struggle toward intellectual integrity. The setting may be the world of Hasidic Judaism, but the drama and the insights are universal.” —Rebecca Newberger Goldstein, 36 Arguments for the Existence of God: A Work of Fiction

“All Who Go Do Not Return is a deeply honest and moving story about a man's decision to do something both so simple and so radical - to live in accordance with his own beliefs. Shulem Deen has written an enormously powerful and important memoir about faith, doubt and freedom.” —Tova Mirvis

“On the eve of his marriage, at eighteen, Shulem Deen knew how to slaughter an ox in Jerusalem's ancient temple, but he knew less than most seven-year-olds do about sex and movies and technology and literature--about the world that lay only miles away from him. Among the Skver Hasids, all who go do not return, but in writing this memoir, Deen has returned, and brought us, his lucky readers, with him. This is a heartbreaking book, and an important one, about the consequences of being true to yourself, and about a world and a community few of us know.” —Joshua Henkin