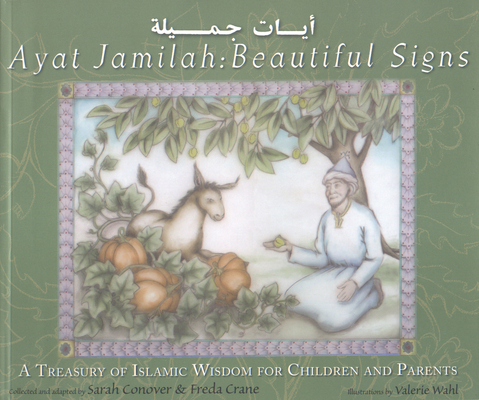 Winner of the 2004 Aesop Prize, Ayat Jamilah/Beautiful Signs: a Treasury of Islamic Wisdom for Children and Parents is the second book in Eastern Washington University Press' This Little Light of Mine series. A young adult/adult crossover anthology, it draws from not only the core of Islamic spirituality and ethics, the Qur'an, and the traditions (hadiths), but also from the mystical verse, folk tales, and exemplary figures of the Islamic narrative. Unlike any other collection of Islamic stories, Beautiful Signs gathers traditional stories from the farthest reaches of the Muslim world, which stretches from Morocco in the west to Indonesia in the east, and from China in the north to Tanzania in the south. This unique anthology, with its rich and thorough explanatory notes, will be invaluable to anyone wishing to understand, or to teach, geography, world history, or world religions. It will also be treasured by Muslim families and by all parents committed to broadening the lives and values of their children and themselves.

Sarah Conover is the co-author of Ayat Jamilah: Beautiful Signs: A Treasury of Islamic Wisdom for Children and Parents (Skinner House Books) and other books on world faith traditions.

Freda Crane is an educator who has worked to develop Islamic curriculum on three continents. She received an MA in curriculum from the University of California, Berkeley, and an EdD from the University of Cincinnati. A practicing Muslim for over thirty years, Dr. Crane has developed instructional methods and curriculum for Muslim students in the United States, Saudi Arabia, South Africa, and Malaysia. For several years she was children's book editor for American Trust Publications, an Islamic publishing house, and she has long been active in the Islamic Society of North America. Dr. Crane lives in Cincinnati, Ohio, with her husband, Dr. Mohammed Shamma. They have five children and five grandchildren, one of whom is named Ayah Jamilah (Beautiful Sign). She is in charge of curriculum development at FADEL, the Foundation for the Advancement and Development of Education and Learning.

Illustrator Valerie Wahl currently lives and works in Spokane, Washington. She has read thousands of books to her children over the years, but this is her first try at illustrating one. She is a graduate of Washington State University where she studied Fine Art.