A Dark Place in the Jungle: Science, Orangutans, and Human Nature (Hardcover) 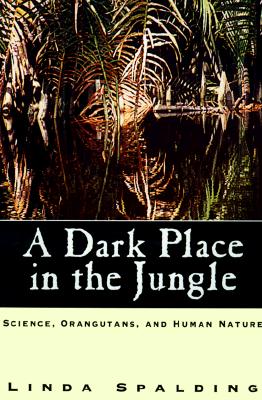 By Linda Spalding
This item is not available.
Out of Print

In A Dark Place in the Jungle, writer Linda Spalding travels to Borneo's threatened jungles on the trail of orangutan researcher Birute galdikas. What she finds is an unholy mix of foreign scientists, government workers, tourists, loggers, descendants of Dayak headhunters, Javanese gold miners, and half-tame orangutans.

Galdikas, along with Dian Fossey and Jane Goodall. Formed the famed trio of "angels" Louis Leakey encouraged to study great apes in the wild In 1971, she went into the jungle to study orangutans and decades later emerged with a rundown empire crumbling around her. Along the way, as poachers and timber barons slaughtered orangutans by the hundreds, Galdikas evolved into Ibu, the great mother of orphan orangutans, blurring the line between ape and human, tourist and scientist, Eden and everything else. To the orangutans, this was perhaps the cruelest blow of all.

Spalding's quest takes her from the offices of Galdika's foundation in Los Angeles to the crocodile-infested Sekonyer River in Borneo, where she confronts the sad, corrupting failure of a woman trying desperately to mother a species to survival; the dangers and temptations of ecotourism; and the arrogance of the human inclination to alter the things we set out to save.

Here is a book that shows us no paradise is safe from the machinations of man, and no one immune to temptation.

Linda Spalding is the author of two novels, Daughters of Captain Cook and The Paper Wife. Born in Kansas, she has lived in Mexico, Japan, and Hawaii. She lives now in Toronto, where she is the editor of Brick: A Literary Journal.