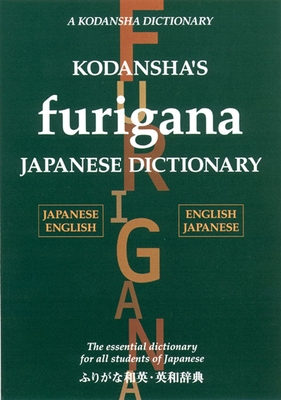 A comprehensive, communicative, and practical guide to using Japanese, Kodansha's Furigana Japanese Dictionary is an invaluable tool for anyone with an interest in the Japanese language. It has been edited with the needs of English-speaking users in mind, whether students, teachers, business people, or casual linguists, and special care has been taken at each stage of its compilation including the selection of entry words and their equivalents, the wording of the detailed explanations of Japanese words, the choice of example sentences, and even its functional page design to maximize its usefulness.

What is furigana and why is it so important?
Furigana refers to the small kana that are printed above or alongside kanji to show their pronunciation. With furigana superscripts, the beginner who is familiar with hiragana and katakana is able to read even the most difficult and obscure kanji at a glance. Other dictionaries either provide little or no guide to kanji readings or romanize some or all of the Japanese words and sentences. In the past, romanized dictionaries were of some value to students using textbooks that contained no Japanese script. Now, however, an increasing number of influential curricula around the world are based on a rationale and methodology that demands the introduction of hiragana and katakana from the earliest stages. Learners and their teachers using such curricula will inevitably feel more comfortable with a dictionary such as Kodansha s Furigana Japanese Dictionary, one that shows the pronunciation of kanji with a familiar and authentic kana script.
Combining Kodansha's Furigana Japanese-English Dictionary (1995) and Kodansha's Furigana English-Japanese Dictionary (1996) in one portable. affordable, and user-friendly volume, this dictionary has the following unique features:
•     A basic vocabulary of 30,000 entries covers the most frequently used English and Japanese words
•     Special treatment has been given to hundreds of words, names, and phrases of special relevance to English-speaking students of Japanese
•     Semantic and usage differences between Japanese words and expressions are explained in clear English
•     Thousands of example sentences and phrases illustrate how Japanese words are used in context
•     Special information is provided on verb conjugations, formality, and other aspects of Japanese grammar and usage