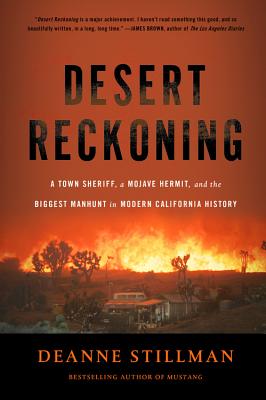 By Deanne Stillman
$18.99
Usually arrives at our store within 4-7 days

North of Los Angeles - the studios, the beaches, Rodeo Drive - lies a sparsely populated region that comprises fully one half of Los Angeles County. Sprawling across 2200 miles, this shadow side of Los Angeles is in the high Mojave Desert. Known as the Antelope Valley, it's a terrain of savage dignity, a vast amphitheatre of startling wonders that put on a show as the megalopolis burrows northward into the region's last frontier. Ranchers, cowboys, dreamers, dropouts, bikers, hikers, and felons have settled here - those who have chosen solitude over the trappings of contemporary life or simply have nowhere else to go. But in recent years their lives have been encroached upon by the creeping spread of subdivisions, funded by the once easy money of subprime America. McMansions - many empty now - gradually replaced Joshua trees; the desert - America's escape hatch - began to vanish as it became home to a latter-day exodus of pilgrims.

It is against the backdrop of these two competing visions of land and space that Donald Kueck - a desert hermit who loved animals and hated civilization - took his last stand, gunning down beloved deputy sheriff Steven Sorensen when he approached his trailer at high noon on a scorching summer day. As the sound of rifle fire echoed across the Mojave, Kueck took off into the desert he knew so well, kicking off the biggest manhunt in modern California history until he was finally killed in a Wagnerian firestorm under a full moon as nuns at a nearby convent watched and prayed.

This manhunt was the subject of a widely praised article by Deanne Stillman, first published in Rolling Stone, a finalist for a PEN Center USA journalism award, and included in the anthology Best American Crime Writing 2006. In Desert Reckoning she continues her desert beat and uses Kueck's story as a point of departure to further explore our relationship to place and the wars that are playing out on our homeland. In addition, Stillman also delves into the hidden history of Los Angeles County, and traces the paths of two men on a collision course that could only end in the modern Wild West. Why did a brilliant, self-taught rocket scientist who just wanted to be left alone go off the rails when a cop showed up? What role did the California prison system play in this drama? What happens to people when the American dream is stripped away? And what is it like for the men who are sworn to protect and serve?

Deanne Stillman is the author of Blood Brothers; Mustang, a California Book Award silver medalist; and Twentynine Palms, an LA Times Best Book of the Year that Hunter S. Thompson called "a strange and brilliant story by an important American writer."

"The finest of the recent wave of nonfiction books about the desert."
—Newsweek

"Stillman is able to open our hearts to people we might otherwise judge or dismiss. . . . She takes us on a journey as full of desolation and grandeur as the desert itself."
—Los Angeles Review of Books