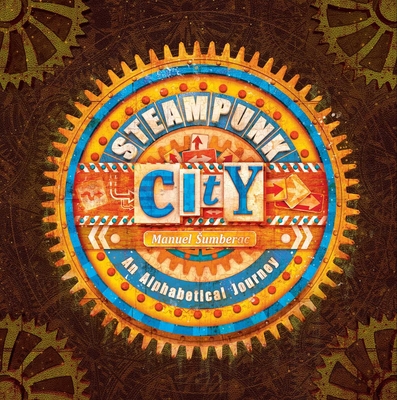 Take an alphabetical journey through a rich and colorful steampunk worldin this lavishly illustrated volume that invites readers to linger over every intricate detail.

Steampunk, with its irresistible combination of Victorian-era style and futuristic sensibility, comes to children's books with this stunning alphabet. Brilliantly colorful paintings and rhyming text illustrate each letter of the alphabet, inviting the reader on a voyage through a quirky steampunk fantasy world, where things are not quite what one might expect. Kids will love the ingeniously detailed depictions of the machines and objects that exemplify each letter, while older steampunk fans (from tweens to parents) will enjoy poring over these gorgeous retro-futuristic dreamscapes. Readers will find no simpering A is for Apple inSteampunk City,but rather an imagination-fueled alphabet that transcends age groups and enthralls readers of all ages.

· with its compelling illustrations, this book works as an introduction to the alphabet for younger readers and as a steampunk primer for older kids, who just might see the alphabet in an entirely new light

· though it began as a sub-genre of science fiction, steampunk has quickly crossed cultural categories to become a popular theme in fashion, design, film, music, and even food and drink

· no less an authority than IBM's Social Sentiment Index, which analyzed more than half a million public posts on message boards, blogs, social media sites, and websites, predicted in late 2013 that steampunk will build to a peak trend over the next 2 years

"The images are intricate and will spark the brainwaves of anybody who gives it a look.”
-Revolution Science Fiction