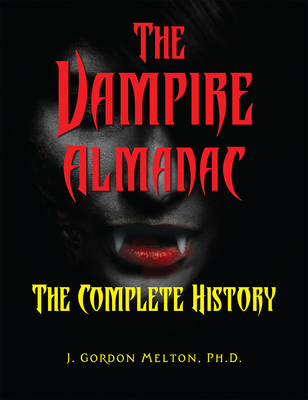 Grab a stake, a fistful of garlic, a crucifix and holy water as you enter the dark, blood-curdling world of the original pain in the neck in this ultimate collection of vampire facts, fangs, and fiction

What accounts for the undying fascination people have for vampires? How did encounters with death create centuries-old myths and folklore in virtually every culture in the world? When did the early literary vampires--as pictured by Goethe, Coleridge, Shelly, Polidori, Byron, and Nodier as the personifications of man's darker side--transform from villains into today's cultural rebels?

Showing how vampire-like creatures organically formed in virtually every part of the world, The Vampire Almanac: The Complete History by renowned religion expert and fearless vampire authority J. Gordon Melton, Ph.D., examines the historic, societal, and psychological role the vampire has played--and continues to play--in understanding death, man's deepest desires, and human pathologies. It analyzes humanity's lusts, fears, and longing for power and the forbidden

Today, the vampire serves as a powerful symbol for the darker parts of the human condition, touching on death, immortality, forbidden sexuality, sexual power and surrender, intimacy, alienation, rebellion, violence, and a fascination with the mysterious. The vampire is often portrayed as a symbolic leader advocating an outrageous alternative to the demands of conformity. Vampires can also be tools for scapegoating such as when women are called "vamps" and bosses are described as "bloodsuckers."

Meet all of the villains, anti-heroes, and heroes of myths, legends, books, films, and television series across cultures and today's pop culture in The Vampire Almanac. It assembles and analyzes hundreds of vampiric characters, people, and creatures, including Buffy the Vampire Slayer, Vlad the Impaler, Edward Cullen and The Twilight Saga, Bram Stoker, Lestat De Lioncourt and The Vampire Chronicles, Lon Chaney, True Blood, Bela Lugosi, Dracula, Dark Shadows, Lilith, Vampire Weekend, Batman, Nosferatu, and so many more.

There is a lot to sink your teeth into with this deep exhumation of the undead. Quench your thirst for facts, histories, biographies, definitions, analysis, immortality, and more This gruesomely thorough book of vampire facts also has a helpful bibliography, an extensive index, and numerous photos, adding to its usefulness.