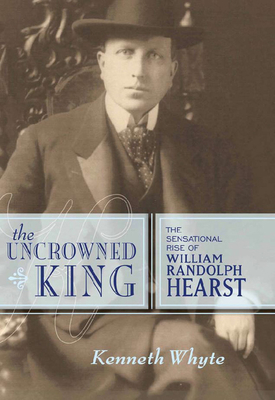 By Kenneth Whyte
This item is not available.
Hard to Find

A lively, unexpected, and impeccably researched piece of popular history, The Uncrowned King reveals how an unheralded young newspaperman from San Francisco arrived in New York and created the most successful daily of his time.

Featuring an eight-page insert of black and white photographs, The Uncrowned King offers a window onto the media world at the turn of the 19th century, as seen by its most successful and controversial figure, William Randolph Hearst. Kenneth Whyte's anecdotal, narrative style chronicles Hearst's rivalry with Joseph Pulitzer, the undisputed king of New York journalism, in the most spectacular newspaper war of all time. They battled head-to-head for three years, through the thrilling presidential election campaign of 1896 and the Spanish-American War--a conflict that Hearst was accused of fomenting and that he covered in person. By 1898, Hearst had supplanted Pulitzer as the dominant force in New York publishing, and was well on his way to becoming one of the most powerful and fascinating private citizens in 20th-century America.

"Kenneth Whyte . . . sets out to de-demonize Hearst in his dramatic early years . . . an] arresting portrait--of the emerging power of the press at the end of the 19th century." --The New York Times Book Review

"Superbly written and revealing . . . A very worthwhile reexamination of the rise of a flawed but accomplished man." --Booklist

One of Canada's pre-eminent journalists, Kenneth Whyte is the editor-in-chief of Maclean's, Canada's weekly current affairs magazine. He served as editor of the monthly Saturday Night magazine at the peak of its popularity and as founding editor-in-chief of the National Post.

"The conventional understanding of newspaper magnate Hearst as haunted meglomaniac, cynical purveyor of prurience and jingoistic instigator of the Spanish-American War gets a major challenge in this scintillating biographical study. Maclean's editor Whyte covers the years from 1895-1898, when Hearst took a revamped New York Journal to the top of the newspaper market by way of a bitter circulation war with Joseph Pulitzer's rival New York World. Whyte styles Hearst a brilliant and creative media entrepreneur with a gift for managing high-strung (and often drunken) subordinates, progressive politics and a sincere social conscience that animated his paper's crusading journalism. Even Hearst's agitation for war with Spain, Whyte contends, was more justifiable and journalistically responsible than is thought—and may have helped forestall a 'genocide' in Cuba. Whyte considers the 'yellow journalism' slur often hurled at Hearst a compliment; he finds the Journal to be 'a demanding, sophisticated read' that used emotion and drama to draw readers into reporting of real significance. No slouch himself when it comes to colorful profiles and engrossing narrative, Whyte makes Hearst's rise an entertaining saga of newspapering's heroic age, when the popular press became an unofficial pillar of democracy." —Publishers Weekly (starred review)