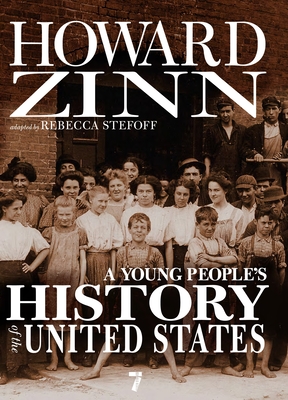 The visionary historical work of professor and activist HOWARD ZINN (1922–2010) is widely considered one of the most important and influential of our era. After his experience as a bombardier in World War II, Zinn became convinced that there could no longer be such a thing as a “just war,” because the vast majority of victims in modern warfare are, increasingly, innocent civilians. In his books, including A People’s History of the United States, its companion volumeVoices of a People’s History of the United States, and countless other titles, Zinn affirms the power of the people to influence the course of events.

REBECCA STEFOFF is the author of more than 100 nonfiction books for children and young adults, and she has adapted several best-selling history books for younger readers.

“Zinn has written a brilliant and moving history of the American people from the point of view of those who have been exploited … the book is an excellent antidote to establishment history … While the book is precise enough to please specialists, it should satisfy any adult reader.” —Library Journal

“In many years of searching, we have not found one history book we would recommend to them—until [the] just published A Young People's History of the United States. This is the edition of A People's History that we have all been waiting for.” —Deborah Menkart, executive director, Teaching for Change

“Zinn's work exemplifies an approach to history that is radical, regardless of its subject or geographical location. He tells us the untold story, the story of the world's poor, the world's workers, the world's homeless, the world's oppressed, the people who don't really qualify as real people in official histories. Howard Zinn painstakingly unearths the details that the powerful seek to airbrush away. He brings official secrets and forgotten histories out into the light, and in doing so, changes the official narrative that the powerful have constructed for us. He strips the grinning mask off the myth of the benign American Empire. To not read Howard Zinn is to do a disservice to yourself.” —Arundhati Roy

“[Zinn] gives a real insight into history that is often left out of textbooks. Highly recommended.” —Socialist Review