Surprised by Beauty: A Listener's Guide to the Recovery of Modern Music (Paperback) 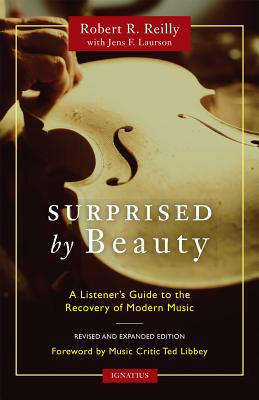 The best music of the 20th century "developed our capacity for feeling, deepened our compassion, and furthered our quest for and understanding of what Aristotle called 'the perfect end of life' ".
— from the Foreword by NPR music critic Ted Libbey

The single greatest crisis of the 20th century was the loss of faith. Noise—and its acceptance as music—was the product of the resulting spiritual confusion and, in its turn, became the further cause of its spread. Likewise, the recovery of modern music, the theme to which this book is dedicated, stems from a spiritual recovery. This is made explicitly clear by the composers whose interviews with the author are collected in this book.

Robert Reilly spells out the nature of the crisis and its solution in sections that serve as bookends to the chapters on individual composers. He does not contend that all of these composers underwent and recovered from the central crisis he describes, but they all lived and worked within its broader context, and soldiered on, writing beautiful music. For this, they suffered ridicule and neglect, and he believes their rehabilitation will change the reputation of modern music.

It is the spirit of music that this book is most about, and in his efforts to discern it, Reilly has discovered many treasures. The purpose of this book is to share them, to entice you to listen—because beauty is contagious. English conductor John Eliot Gardiner writes that experiencing Bach's masterpieces "is a way of fully realizing the scale and scope of what it is to be human". The reader may be surprised by how many works of the 20th and 21st centuries of which this is also true.

The book includes 100s of CD recommendations, which will be regularly updated on the website for the book: www.SurprisedByBeauty.org.

Robert R. Reilly has written about classical music for more than 35 years, including for Crisis magazine, and where he was music critic for 16 years. He has written for High Fidelity, Musical America, Schwann/Opus, and the American Record Guide. He is the director of the Westminster Institute. In his 25 years in government, he served in the Office of the Secretary of Defense, the White House under President Ronald Reagan, and the U. S. Information Agency. He was also the director of Voice of America. He has published widely on foreign policy, "war of ideas" issues, and classical music and is the author of The Closing of the Muslim Mind and other books.