Together: An Inspiring Response to the "Separate-But-Equal" Supreme Court Decision That Divided America (Paperback) 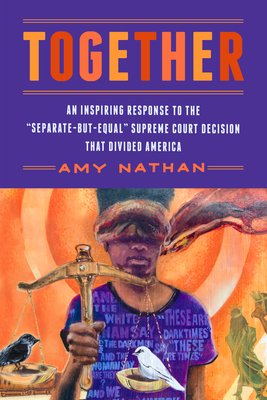 "An ambitious account of the legacies of Plessy and Ferguson . . . Undeniably timely and representative of the necessary work ahead."--Kirkus Reviews "Amy Nathan's well-researched and beautifully written book makes clear the history of racism that has kept Black people separate and unequal in U.S. society for so long--and how we today can work to chart a new future. The friendship between Keith Plessy and Phoebe Ferguson, descendants of the antagonists in the infamous Supreme Court decision that cemented racial inequality, Plessy v. Ferguson, demonstrates that ancestry need not be destiny--if we are willing to do the hard work of repair. In Amy Nathan's capable hands, their intertwined histories come alive, demonstrating one of many paths we can purposefully take towards a more equitable society."--Leslie M. Harris, Professor of History, Northwestern University, and author of In the Shadow of Slavery: African Americans in New York City, 1626-1863
Keith Plessy and Phoebe Ferguson were both born in New Orleans in 1957. Sixty-five years earlier, in 1892, a member of each of their families met in a Louisiana courtroom when Judge John Howard Ferguson found Homer Plessy guilty of breaking the law by sitting in a train car for white passengers. The case of Plessy v. Ferguson went all the way to the U.S. Supreme Court, which ruled that "separate-but-equal" was constitutional, sparking decades of unjust laws and discriminatory attitudes. In Together, Amy Nathan threads the personal stories of Keith Plessy and Phoebe Ferguson into the larger history of the Plessy v. Ferguson case, race relations, and civil rights movements in New Orleans and throughout the U.S. She tells the inspiring tale of how Keith and Phoebe came together to change the ending of the story that links their families in history. It's "a flip on the script," said Keith.

Amy Nathan is an award-winning author of nonfiction books for adults and young people, including an earlier Paul Dry Books selection, Round and Round Together: Taking a Merry-go-Round Ride into the Civil Rights Movement (2011); Abrams Books brought out a picture book version of that volume, co-authored with Sharon Langley, A Ride to Remember (2020). A graduate of Harvard with master's degrees from the Harvard Graduate School of Education and Columbia's Teachers College, Nathan's other books for young people include two on women's history for National Geographic, two on music and dance for Holt, books on homework and allowances, and one about civil rights hero Sarah Keys Evans: Take a Seat--Make a Stand. She has also written three music-advice books for adults and young people for Oxford University Press. Nathan grew up in Baltimore and now lives in Westchester County, New York. www.AmyNathanBooks.com