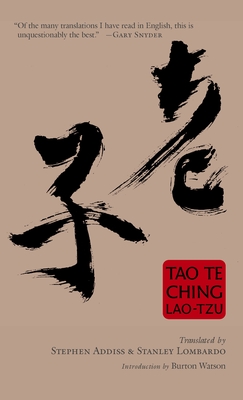 In what may be the most faithful translation of the Tao Te Ching, the translators have captured the terse, enigmatic beauty of the original masterpiece without embellishing it with personal interpretation or bogging it down with explanatory notes. By stepping out of the way and letting the original text speak for itself, they deliver a powerfully direct experience of the Tao Te Ching that is a joy to come back to again and again.

And for the first time in any translation of the Tao Te Ching, now you can interact with the text to experience for yourself the nuanced art of translating. In each of the eighty-one chapters, one significant line has been highlighted and alongside it are the original Chinese characters with their transliteration. You can then turn to the glossary and translate this line on your own, thereby deepening your understanding of the original text and of the myriad ways it can be translated into English.

Complementing the text are twenty-three striking ink paintings brushed by Stephen Addiss and an introduction by the esteemed Asia scholar Burton Watson.

Thomas Cleary holds a Ph.D in East Asian Languages and Civilizations from Harvard University. He is the translator of more than fifty volumes of Buddhist, Taoist, Confucian, and Islamic texts from Sanskrit, Chinese, Japanese, Pali, and Arabic.

“This crystalline translation of the Tao Te Ching is accurate down to the nuance and is as concisely poetic as the original. Of the many translations I have read in English, this is unquestionably the best.”—Gary Snyder

“This is by far the best translation on the market today.”—Livia Kohn, Professor of Religion, Boston University