Hagakure: The Book of the Samurai (Hardcover) 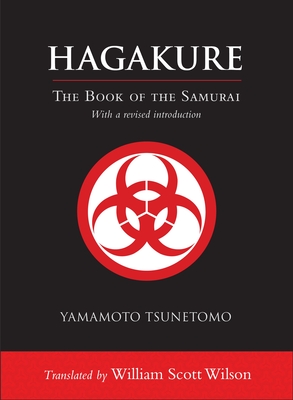 Living and dying with bravery and honor is at the heart of Hagakure, a series of texts written by an eighteenth-century samurai, Yamamoto Tsunetomo. It is a window into the samurai mind, illuminating the concept of bushido—the Way of the Warrior—which dictated how samurai were expected to behave, conduct themselves, live, and die. While Hagakure was for many years a secret text known only to the warrior vassals of the Nabeshima clan to which the author belonged, it later came to be recognized as a classic exposition of samurai thought.

The original Hagakure consists of over 1,300 short texts that Tsunetomo dictated to a younger samurai over a seven-year period. William Scott Wilson has selected and translated here three hundred of the most representative of those texts to create an accessible distillation of this guide for samurai. No other translator has so thoroughly and eruditely rendered this text into English.

For this edition, Wilson has added a new introduction that casts Hagakure in a different light than ever before. Tsunetomo refers to bushido as “the Way of death,” a description that has held a morbid fascination for readers over the years. But in Tsunetomo’s time, bushido was a nuanced concept that related heavily to the Zen concept of muga, the “death” of the ego. Wilson’s revised introduction gives the historical and philosophical background for that more metaphorical reading of Hagakure, and through this lens, the classic takes on a fresh and nuanced appeal.

William Scott Wilson is the foremost translator into English of traditional Japanese texts on samurai culture. He received BA degrees from Dartmouth College and the Monterey Institute of Foreign Studies, and an MA in Japanese literary studies from the University of Washington. His best-selling books include The Book of Five Rings, The Unfettered Mind, and The Lone Samurai, a biography of Miyamoto Musashi.

“This is a great book for anyone looking for a more centered way of life, or just some good advice about living.”—Sacramento Book Review