Away with the Fairies (Phryne Fisher Mysteries) (Large Print / Paperback) 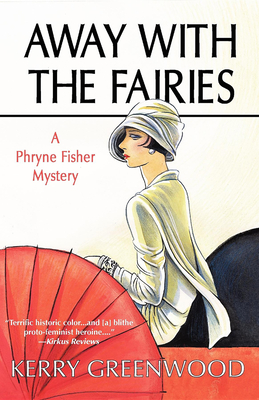 This is book number 11 in the Phryne Fisher Mysteries series.

It's 1928 in Melbourne and Phryne is asked to investigate the puzzling death of a famous author and illustrator of fairy stories. To do so, Phryne takes a job within the women's magazine that employed the victim and finds herself enmeshed in her colleagues' deceptions.

But while Phryne is learning the ins and outs of magazine publishing first hand, her personal life is thrown into chaos. Impatient for her lover Lin Chung's imminent return from a silk-buying expedition to China, she instead receives an unusual summons from Lin Chung's family, followed by a series of mysterious assaults and warnings.

Kerry Greenwood was born in the Melbourne suburb of Footscray and after wandering far and wide, she returned to live there. She has degrees in English and Law from Melbourne University and was admitted to the legal profession on the 1st April 1982, a day which she finds both soothing and significant. Kerry has written three series, a number of plays, including The Troubadours with Stephen D’Arcy, is an award-winning children’s writer and has edited and contributed to several anthologies. The Phryne Fisher series (pronounced Fry-knee, to rhyme with briny) began in 1989 with Cocaine Blues which was a great success. Kerry has written twenty books in this series with no sign yet of Miss Fisher hanging up her pearl-handled pistol. Kerry says that as long as people want to read them, she can keep writing them. In 2003 Kerry won the Lifetime Achievement Award from the Australian Association.

"Phryne Fisher isnt really a glossy girl, she's just pretending to be one to solve the suspicious death of an old luvvie who wrote and illustrated fairy stories for a womens magazine. Not exactly riveting reading by todays standards, but this story is set in the 20s when women read articles on how to be virtuous, and never ventured out without a hat or gloves. Greenwood manages to evoke the elegance of the era in this charming tale, which dwells as much on the wardrobe of the heroine as the morbid details of murder and mayhem."  -- Vogue Magazine, June 2001

"This series is the best Australian import since Nicole Kidman, and Phryne is the flashiest new female sleuth in the genre."   -- Booklist

"Kerry Greenwood makes it impossible for the audience not to like the charming Phyrne or her investigations."  --Midwest Book Review