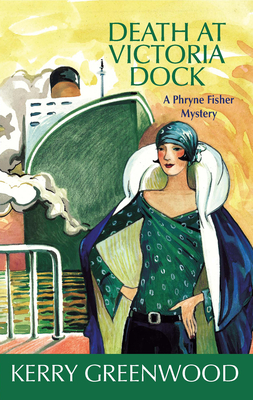 This is book number 4 in the Phryne Fisher Mysteries series.

Driving home late one night, Phryne Fisher is surprised when someone shoots out her windscreen. When she alights she finds a pretty young man with an anarchist tattoo dying on the tarmac just outside the dock gates. He bleeds to death in her arms, and all over her silk shirt. Enraged by the loss of the clothing, the damage to her car, and this senseless waste of human life, Phryne promises to find out who is responsible. But she doesn't yet know how deeply into the mire she'll have to go: bank robbery, tattoo parlours, pubs, spiritualist halls, and anarchists. Along this path, Phryne meets Peter, a scarred but delectable wharfie who begins to unfold the mystery of who would need a machine gun in Melbourne. But when someone kidnaps her cherished companion, Dot, Phryne will stop at nothing to retrieve her.