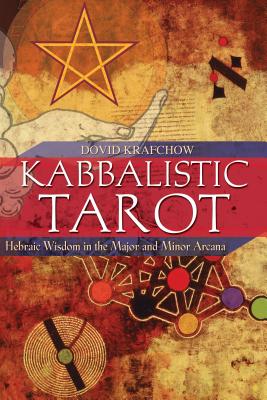 When the Greeks invaded Israel and forbade study of the Torah, the Jewish people began a secret method of Toranic study that appeared to be merely a simple way to fill time: playing cards. These first tarot decks enabled study of the Torah without detection. Once the Maccabees expelled the Greeks from Israel and Israel once again became a Jewish kingdom, tarot cards dropped from sight. Fifteen hundred years later, in response to Jewish disputations with Catholic theologians, political and religious persecutions, and ultimately the Inquisition, the cards resurfaced as a secret learning tool of the Torah.

In Kabbalistic Tarot, Dovid Krafchow details how the true meaning of the tarot is locked within the Kabbalah. He shows the correspondence between the 22 Major Arcana cards and the 22 letters of the Hebrew alphabet and how the four suits correspond to the four kabbalistic worlds of Briah, Yitzerah, Asiyah, and Atzilut. He describes the kabbalistic meanings of each of the 78 cards and their relations to the Torah and provides insight into the Tree of Life spread through several kabbalistic readings.

Dovid Krafchow has studied Kabbalah and practiced the Tarot for more than 30 years. He began his study of the Torah at the Hadar Hatorah Institute for Rabbinical Studies in Brooklyn, New York, and lived for 10 years in Zefat, Israel, the city where the Kabbalah was received by the Ari Zal (Rabbi Isaac Luria) 500 years ago. He lives in Vancouver.

“Readers intrigued by the currently popular Kabala who also have some familiarity with the use of tarot cards for divination and life guidance will not find a reference book but a compelling work that combines and explains the historical and current use of both traditions.”
— Brad Eden, Library Journal, July 2005

"Krafchow has come up with an original approach to interpreting tarot in relationship to the Tree of Life. . . . His book is the best practical manual on reading the Waite/Colman-Smith I have read. . . . To one who has invested much time in these studies, Krafchow’s work represents a major shift in perspective. Any time an author does that he contributes to the body of wisdom in his field, and inspires new lines of thought. . . . He brings to his subject a voice of authority that illuminates rather than obfuscates divine truth. Simple, to the point, yet quite profound, the writing style employed . . . .makes it a pleasure to read and reflect upon. Unlike many other metaphysical texts, this one manages to be highly accessible to a lay reader. I enthusiastically recommend Kabbalistic Tarot as the primary reference book for anyone wishing to begin his study of the Waite/Colman-Smith deck. Krafchow has written a book that contributes to the understanding of tarot and Qabalah and lays groundwork for further exploration."
— Ashé! Journal of Experimental Spirituality, May 2006