Barbarian Rites: The Spiritual World of the Vikings and the Germanic Tribes (Paperback) 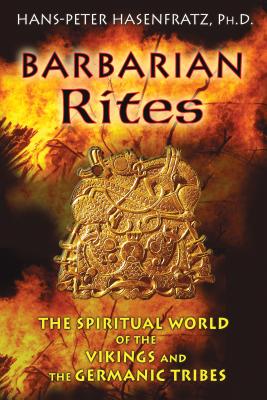 • Explores the different forms of magic practiced by these tribes, including runic magic, necromancy (death magic), soul-travel, and shape-shifting

• Examines their rites of passage and initiation rituals and their most important gods, such as Odin, Loki, and Thor

• Looks at barbarian magic in historical accounts, church and assembly records, and mythology as well as an eyewitness report from a 10th-century Muslim diplomat

Before the conversion of Europe to Christianity in the Middle Ages, Germanic tribes roamed the continent, plundering villages and waging battles to seek the favor of Odin, their god of war, ecstasy, and magic. Centuries later, predatory Viking raiders from Scandinavia carried on similar traditions. These wild “barbarians” had a system of social classes and familial clans with complex spiritual customs, from rites of passage for birth, death, and adulthood to black magic practices and shamanic ecstatic states, such as the infamous “berserker’s rage.”

Chronicling the original pagan tradition of free and wild Europe--and the use and abuse of its myths and magic by the Nazis--Hans-Peter Hasenfratz offers a concise history of the Germanic tribes of Europe and their spiritual, magical, and occult beliefs. Looking at historical accounts, church and assembly records, mythology, and folktales from Germany, Russia, Scandinavia, and Iceland as well as an eyewitness report of Viking customs and rituals from a 10th-century Muslim diplomat, Hasenfratz explores the different forms of magic--including charms, runic magic, necromancy, love magic, soul-travel, and shamanic shape-shifting--practiced by the Teutonic tribes and examines their interactions with and eventual adaptation to Christianity. Providing in-depth information on their social class and clan structure, rites of passage, and their most important gods and goddesses, such as Odin, Loki, Thor, and Freyja, Hasenfratz reveals how it is only through understanding our magical barbarian roots that we can see the remnants of their language, culture, and dynamic spirit that have carried through to modern times.

“Barbarian Rites provides a wealth of facts free from ideological or interpretive overlay, yet does so in a prose that can be read for pleasure as well as instruction. One feels the secure weight of lifelong scholarship behind this book.”
— Joscelyn Godwin, author of Atlantis and the Cycles of Time

“Professor Hasenfratz presents both a solid introduction to the mysterious world of Germanic spirituality and something that goes well beyond the introductory as he demonstrates many deeper insights through his lively comparative and holistic approach.”
— Stephen E. Flowers, Ph.D., director of the Woodharrow Institute and author of The Secret of the Rune

“A number of books describe the pagan gods of the ancient Norsemen, but very few explain why pagan beliefs appealed to so many for so long. In this outstanding English translation of Barbarian Rites, Hasenfratz engages Germanic spiritual tradition seriously and empathetically. He provides an important and useful resource for students of northern European religions at all levels.”
— Stephen Harris, associate professor of German and Scandinavian Studies at the University of Massachu

“Do NOT pass this book by.”
— Michael Gleason, Independent Reviewer, August 2011

“Despite their barbarism, Hasenfratz situates the Vikings within Indo-European culture, and suggests that their view of the end of this world and the coming of a new age will resonate with today’s new age philosophy.”
— Publishers Weekly, September 2011

“An interesting read for those who are drawn to the ways of Thor, Odin and all their kin.”
— Nicholas Breeze Wood, Sacred Hoop Magazine, September 2011

“Far from being a dry academic text, this is a captivating book that will inform and entertain all levels.”
— Psychic Magic, Autumn 2011

“This is a must-read for Heathens and an essential text for scholars of ancient civilizations. A hearty “Well Done!.” to the author and translator for an unflinchingly honest look at this culture, and to Inner Traditions for publishing this singular text.”
— Elizabeth Hazel, FacingNorth.net, October 2011

“Barbarian Rites presents the reader with a clean and delightful overview, a treasure hoard of information about the religious and spiritual world of the North. Its reach will satisfy the scholar who wants to make sure he has a complete overview from the creation Gap to Ragnarok, from Yggdrasil to the casting of runes. Moynihan’s translation is appealingly clear, and his etymological footnotes add to the reader’s enjoyment.”
— G. Ronald Murphy, SJ, Prof. of German, Georgetown University

“The book, which ends with scholarly notes, a bibliography, and an index, should be considered indispensable for all readers with an interest in the roots of Heathen culture.”
— Barbara Ardinger, Witches and Pagans Magazine

“An exploration of the early religious cultures of the Germanic tribes, Barbarian Rites offers a scholarly look at the history of this ancient culture. It begins by asking what constitutes a Germanic tribe, then proceeds to answer that question by offering in-depth analysis of their social structures, cosmography, pantheon and so on. A wonderful and dense book for anyone interested in the ritual practices of ancient cultures.”
— Witches' Almanac, December 2013

“A fascinating and easy read. . . . If you have ever been intrigued about the Vikings and their way of life, this book is a must. It will certainly be a keeper for my professional library for a long time to come.”
— Barbara-Lynn Freed, Transformational Times