Whose Torah?: A Concise Guide to Progressive Judaism (Whose Religion?) (Hardcover) 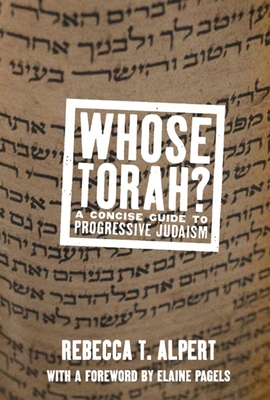 Rabbi Rebecca Alpert is a leading voice in progressive Judaism. A crusader for reform within the Jewish community, she was one of the first women in Jewish history to be ordained a rabbi. Alpert is a celebrated teacher, an expert on Jewish American religious history, and a key public advocate for progressive social issues in contemporary Jewish life.

In Whose Torah?, Alpert sketches a compelling portrait of the progressive values that belong to the core of Judaism today. Reaching deeply into the sources of Jewish tradition, she highlights with unflinching moral clarity the textual basis for a truly just vision of life for all who care about sexual, economic, and racial justice and for those who would oppose all forms of discrimination, unjust war, and the destruction of the environment. Alpert also carefully considers what it means to be Jewish in contemporary America--offering both a passionate and deeply learned defense of progressive Jewish identity.

Whose Torah? will be an essential intellectual resource for progressive Jews and for anyone searching for the religious underpinnings of contemporary progressive politics.

Elaine Pagels, Harrington Spear Paine Foundation Professor of Religion at Princeton University, is the author of numerous, widely acclaimed books on Gnosticism and early Christianity, including The Gnostic Gospels, Beyond Belief, and Reading Judas.

Rebecca Alpert is the chair of the religion department and an associate professor of religion and women's studies at Temple University and was one of the first women in Jewish history to be ordained a rabbi. She has written widely on progressive religion and Judaism; among her books are Like Bread on the Seder Plate and Exploring Judaism (with Jacob Straub). She lives in Philadelphia.