Don't Go Crazy Without Me (Paperback) 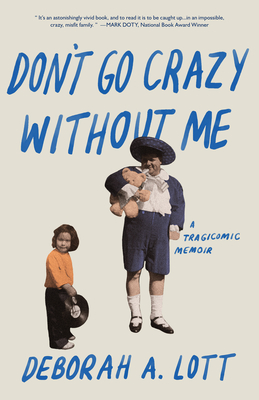 Don't Go Crazy Without Me tells the tragicomic coming of age story of a girl who grew up under the seductive sway of her outrageously eccentric father. He taught her how to have fun; he also taught her to fear food poisoning, other children's infectious diseases, and the contaminating propensities of the world at large. Alienated from her emotionally distant mother, the girl bonded closely with her father and his worldview. When he plunged from neurotic to full-blown psychotic, she nearly followed him. Sanity is not always a choice, but for the sixteen-year-old, decisions had to be made and lines drawn between reality and what her mother called her "overactive imagination." She would have to give up beliefs carried by the infectious agent of her father's love.

Saving herself would require an unconventional reading of Moby Dick, sexual pleasure in the body that had confounded her, and entry into the larger world of political activism as a volunteer in Robert F. Kennedy's Presidential campaign. After attending his last stop at the Ambassador Hotel the night of his assassination, she would come to a new reckoning with loss and with engagement beyond the confines of her family. Ultimately, she would find a way to turn her grief into love.