The Best Horror of the Year Volume Twelve (Paperback) 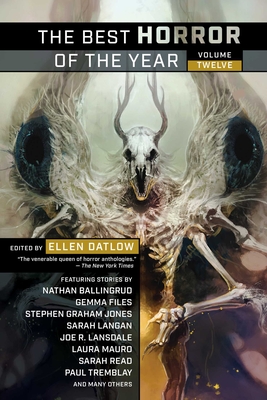 From Ellen Datlow (“the venerable queen of horror anthologies” (New York Times) comes a new entry in the series that has brought you stories from Stephen King and Neil Gaiman comes thrilling stories, the best horror stories available.

For four decades, Ellen Datlow has been at the center of horror. Bringing you the most frightening and terrifying stories, Datlow always has her finger on the pulse of what horror readers crave. Now, with the twelfth volume of the series, Datlow is back again to bring you the stories that will keep you up at night. Encompassed in the pages of The Best Horror of the Year have been such illustrious writers as: Neil Gaiman, Stephen King, Stephen Graham Jones, Joyce Carol Oates, Laird Barron, Mira Grant, and many others.

With each passing year, science, technology, and the march of time shine light into the craggy corners of the universe, making the fears of an earlier generation seem quaint. But this light creates its own shadows. The Best Horror of the Year chronicles these shifting shadows. It is a catalog of terror, fear, and unpleasantness as articulated by today’s most challenging and exciting writers.

Ellen Datlow has been editing science fiction, fantasy, and horror short fiction for more than thirty years. She was the fiction editor of Omni magazine and Sci Fiction and has edited more than fifty anthologies. Datlow has also won lifetime achievement awards from three prominent genre organizations, and currently acquires short fiction for Tor.com.