The Omni-Americans: Some Alternatives to the Folklore of White Supremacy (Paperback) 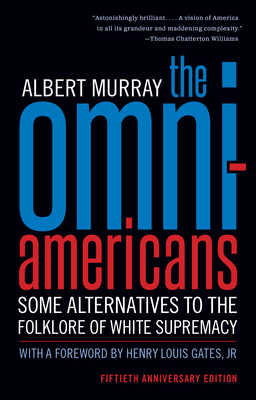 Rediscover the "most important book on black-white relationships" in America in a special 50th anniversary edition introduced by Henry Louis Gates, Jr.

"The United States is in actuality not a nation of black people and white people. It is a nation of multicolored people. . . . Any fool can see that the white people are not really white, and that black people are not black. They are all interrelated one way or another." These words, written by Albert Murray at the height of the Black Power movement, cut against the grain of their moment, and announced the arrival of a major new force in American letters. In his 1970 classic The Omni-Americans, Murray took aim at protest writers and social scientists who accentuated the "pathology" of race in American life. Against narratives of marginalization and victimhood, Murray argued that black art and culture, particularly jazz and blues, stand at the very headwaters of the American mainstream, and that much of what is best in American art embodies the "blues-hero tradition"--a heritage of grace, wit, and inspired improvisation in the face of adversity. Reviewing The Omni-Americans in 1970, Walker Percy called it "the most important book on black-white relationships . . . indeed on American culture . . . published in this generation." As Henry Louis Gates, Jr. makes clear in his introduction, Murray's singular poetic voice, impassioned argumentation, and pluralistic vision have only become more urgently needed today.

Albert Murray (1916-2013) was born in Alabama and graduated from Tuskegee Institute in 1939. His books include South to a Very Old Place, The Hero and the Blues, Train Whistle Guitar, The Spyglass Tree, The Seven League Boots, The Magic Keys, and Stomping the Blues, among others. With Wynton Marsalis and others he was a co-founder of Jazz at Lincoln Center. Murray's collected works are published in two volumes by Library of America.