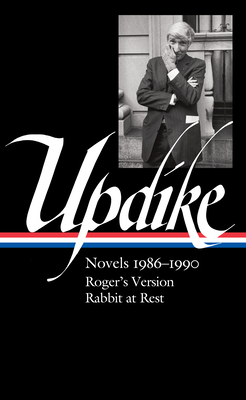 John Updike, at the peak of his powers, concludes his unforgettable Rabbit series and reimagines Hawthorne’s Scarlet Letter for contemporary America

The latest volume in Library of America’s John Updike edition presents two essential novels by the master stylist of postwar American fiction. Roger’s Version (1986) stakes out ground that encompasses Updike’s recurring themes of sex, desire, and adultery as well as an emerging interest in the cosmic implications of contemporary scientific breakthroughs. In a dazzling refashioning of the love triangle at the heart of Hawthorne’s The Scarlet Letter, twin adulteries unfold, revealing the heightened contrasts and inequalities of Ronald Reagan’s America.

Widely hailed upon publication as a masterpiece, awarded a Pulitzer and a National Book Critics Circle prize, Rabbit at Rest (1990) wraps up the saga of Updike’s most enduring protagonist and concludes his “surpassingly eloquent elegy for his country,” in the words of Joyce Carol Oates. Now in his mid-fifties, the outwardly comfortable and complacent Harry Angstrom has settled into leisured obsolescence, dividing his time between Pennsylvania and the Valhalla Village retirement community in Florida. But alongside his golfing, junk-food consumption, and other forms of ease there loom unavoidable markers of Rabbit’s human fragility and his mortality.

John Updike was born in Shillington, Pennsylvania, in 1932. He graduated from Harvard College in 1954, and spent a year in Oxford, England, at the Ruskin School of Drawing and Fine Art. From 1955 to 1957 he was a member of the staff of The New Yorker. He was the author of more than sixty books, including collections of short stories, poems, essays, and criticism. His novels won the Pulitzer Prize, the National Book Award, the National Book Critics Circle, and the Howells Medal, among other honors. He died in 2009.

Christopher Carduff is the Books Editor of the Wall Street Journal. He is editor of John Updike’s posthumous collections Higher Gossip (essays & criticism), Always Looking (writings on art), Selected Poems, and Collected Stories, and is also the editor of the Library of America editions of William Maxwell and John Updike.