The Year We Disappeared: A Father - Daughter Memoir (Hardcover) 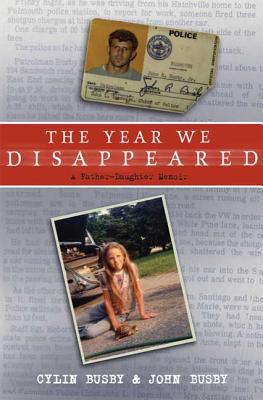 By Cylin Busby, John Busby
This item is not available.
Out of Print

“This is truly a page-turner, and that it's a true story adds another dimension. This family memoir deals with a real crime, but it reads like a terrific mystery/thriller novel. An absolutely riveting read.”
— Leslie Hawkins, Spellbound Children's Bookshop, Asheville, NC

When Cylin Busby was nine years old, she loved Izod shirts, the Muppets, and her pet box turtle. Then, in the space of a night, everything that was normal about her life changed. Her police officer father, John, was driving to his midnight shift when someone pulled up alongside and leveled a shotgun at his window. The blasts that followed tore through his face and left him clinging to life. Overnight, the Busbys went from being the "family next door" to one under twenty-four-hour armed guard, with police escorts to and from school and no contact with friends. Worse, the shooter was still on the loose, and it seemed only a matter of time before he'd come after John-or someone else in the family-again. With their lives unraveling around them and few choices remaining for a future that could ever be secure, the Busby family left everything and everyone they had ever known...and simply disappeared.

As told by both father and daughter, this is a harrowing, at times heartbreaking, account of a shooting and its aftermath-even as it shows a young girl trying to make sense of the unthinkable and the triumph of a family's bravery in the face of crisis.

Cylin Busby is the author of several non-fiction articles as well as fiction books. A former editor with Teen magazine, she now lives in Los Angeles with her family.

“No one with even a marginal interest in true crime writing should miss this page-turner, by turns shocking and almost unbearably sad.” —Publisher's Weekly (starred review)

“A fascinating tale, making the costs of violence unequivocally clear. …John's hard-won conclusion about vengeance—violence needn't be perpetuated because it would only damage his family more--holds a striking lesson for everyone, not just teens.” —Chicago Sun Times

“This riveting story will stay with readers, particularly its message that John's anger and desire for revenge were the hardest wounds to heal.” —Booklist

“The book flows seamlessly back and forth from father's to daughter's perspective, each jump between narrators providing further explanation and insight and pulling readers deeper into the story.” —VOYA (Teen Reviewer)

“This true-crime story manages to be suspenseful and reflective at the same time, and it will draw both leisure and reluctant readers.” —VOYA

“A page-turner… Ultimately, a story of survival and triumph.” —SLJ