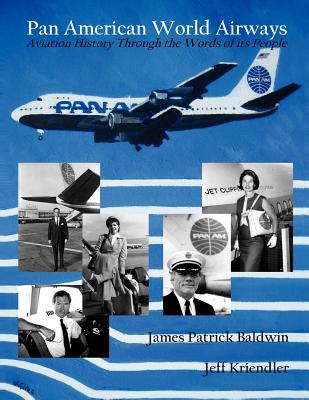 "Pan American World Airways - Aviation History through the Words of its People is a tribute to the legacy of one of the world's great airlines and the men and women who for six decades were the soul of the Company. James Baldwin and Jeff Kriendler have created a compelling book, which through the words of its contributors, captures much of the joy, adventure and spirit which was Pan Am. - Edward S. Trippe, Chairman, Pan Am Historical Foundation "Fathered by the legendary Juan Trippe, Pan American was the leader in international aviation exploration and development. A relentless risk-taker, Trippe was an innovator and ultimate entrepreneur...and this book captures many of Pan Am's most memorable events from personal accounts of the employees who were there." - Sir Richard Branson, Chairman Virgin Group "Once upon a time, not so long ago... flying on Pan American Airways was every bit as exciting as your destination. We miss your style Pan Am " - Erik Lindbergh, Founder, Lindbergh Electric Aircraft Prize (LEAP), and Grandson, Charles Lindbergh "Pan Am...Queen of the Skies and pioneer around the world...shrunk the globe through innovation, and daring and glamorous service in its day. This anthology takes the reader into a coveted position, learning from the people who actually experienced the major milestones in its rise....and fall." - Tony Fernandes, CEO, AirAsia Berhad and Founder, Tune Group "For anyone who has ever traveled, this book is a must. Filled with untold eye-witness accounts of some of the major events that helped shape PanAm, this fascinating anthology helps kindle the magic of fl ight and ensures PanAm's deserved legacy in the annals of commercial aviation." - Jerry Hendin, Managing Partner, Alliance Public Relations, and Former VP, Communications, Boeing Commercial Airplane Group "Pan Am, perhaps the greatest airline in the history of the world, lives now only as memories, and those memories have never been collected and shared as well as they are in this book." - Ted Reed, Airlines Reporter, The Street, and formerly of the Miami Herald "This unique anthology approach rings true because it comes from the hearts and souls of the employees, those who built Pan Am to its iconic leadership position in international travel. Whether it was ushering in the jet age and later the Jumbo jet era, building luxurious hotels for high-end travelers, or fl ying troops to global military theaters, Pan Am was a proud symbol of America at home and overseas." - David Neeleman, Founder, Jetblue Airways and Founder, Chairman, and CEO, Azul Brazilian Airlines.