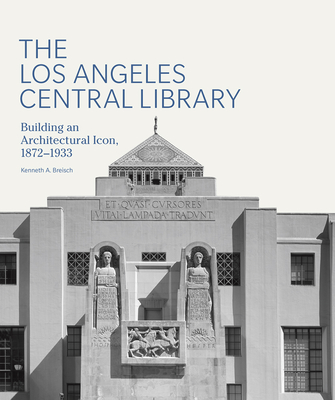 In the most comprehensive investigation of the Los Angeles Public Library’s early history and architectural genesis ever undertaken, Kenneth Breisch chronicles the institution’s first six decades, from its founding as a private library association in 1872 through the completion of the iconic Central Library building in 1933. During this time, the library evolved from an elite organization ensconced in two rooms in downtown
LA into one of the largest public library systems in the United States—with architect Bertram Grosvenor Goodhue’s building, a beloved LA landmark, as its centerpiece.

Goodhue developed a new style, fully integrating the building’s sculptural and epigraphic program with its architectural forms to express a complex iconography. Working closely with sculptor Lee Oskar Lawrie and philosopher Hartley Burr Alexander, he created a great civic monument that, combined with the library’s murals, embodies an overarching theme: the light of learning.

“A building should read like a book, from its title entrance to its alley colophon,” wrote Alexander—a narrative approach to design that serves as a key to understanding Goodhue’s architectural gem. Breisch draws on a wealth of primary source material to tell the story of one of the most important American buildings of the twentieth century and illuminates the formation of an indispensible modern public institution: the American public library.

Kenneth A. Breisch is associate professor in the School of Architecture at the University of Southern California.

“With comprehensive notes and a wonderfully detailed and navigable index, this fine example of scholarship is comprehensive in its story of the growth of support for a public library in Los Angeles; of the evolution of early designs with a signature, central ribbed dome and tiled pyramid-topped tower; and of the sculpture and murals that make the building a true Gesamtkunstwerk, or synthesis of art forms. The study is essential for all architecture and urban history collections.”
— Choice