Buried by Vesuvius: The Villa dei Papiri at Herculaneum (Hardcover) 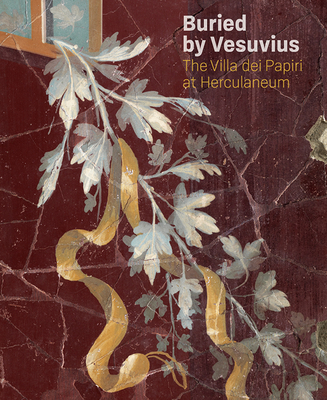 The first truly comprehensive look at all aspects of the Villa dei Papiri at Herculaneum, from its original Roman context to the most recent archaeological investigations.

The Villa dei Papiri at Herculaneum, the model for the Getty Villa in Malibu, is one of the world’s earliest systematically investigated archaeological sites. Buried by the eruption of Mount Vesuvius in 79 CE, the Villa dei Papiri was discovered in 1750 and excavated under the auspices of the Neapolitan court. Never fully unearthed, the site yielded spectacular colored marble floors and mosaics, frescoed walls, the largest known ancient collection of bronze and marble statuary, intricately carved ivories, and antiquity’s only surviving library, with more than a thousand charred papyrus scrolls. For more than two and a half centuries, the Villa dei Papiri and its contents have served as a wellspring of knowledge for archaeological science, art history, classics, papyrology, and philosophy.

After Vesuvius: Treasures from the Villa dei Papiri offers a sweeping yet in-depth view of all aspects of the site. Presenting the latest research, the essays in this authoritative and richly illustrated volume reveal the story of the Villa dei Papiri’s ancient inhabitants and modern explorers, providing readers with a multidimensional understanding of this fascinating site.

“A major intellectual contribution in its own right.”

“The essays are short, informative and well written, and embrace a range of topics including the Herculaneum villa’s ancient context, its rediscovery in the eighteenth century, its contents (including what the catalogue heralds as “antiquity’s only surviving library”), recent excavations and hi-tech attempts to unwrap the carbonized texts.”

“The definitive work on the Villa of the Papyri.”
— The Herculaneum Society

“The book is easily accessible and free of jargon, thus making it useful for students and scholars alike. It is an enormous contribution to the literature on Herculaneum in general and on the Villa dei Papiri in particular, and will be a crucial source for all future research on these and related topics.”
— Bryn Mawr Classical Review

“A welcome and holistic approach to heritage. . . . Very much worth reading.”

“This beautifully illustrated and masterfully arranged exhibition catalogue is a requirement for anyone interested in classical antiquity. . . . The catalogue is organized in four sections, each with superb photographs and detailed descriptions making the content understandable not solely for scholars of antiquity but also for readers new to the subject matter. . . . An exceptional catalogue unlike any current or past scholarly project on the subject to date.”
— Lisa White Gastrell