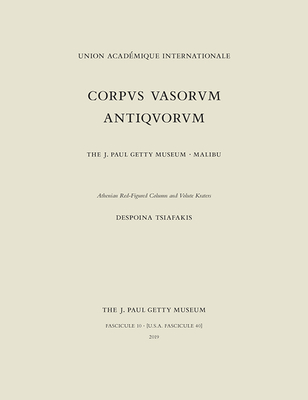 By Despoina Tsiafakis
$130.00
Email or call for price.

This expansive catalogue of ancient Greek painted pottery brings an important series into the digital age with a new open-access format. Cataloging some hundred thousand examples of ancient Greek painted pottery held in collections around the world, the authoritative Corpus Vasorum Antiquorum (Corpus of Ancient Vases) is the oldest research project of the Union Académique Internationale. Nearly four hundred volumes have been published since the first fascicule appeared in 1922.

This new fascicule of the CVA—the tenth issued by the J. Paul Getty Museum and the first ever to be published open access—presents a selection of Attic red-figure column and volute kraters ranging from 520 to 510 BCE through the early fourth century BCE. Among the works included are a significant dinoid volute krater and a volute krater with the Labors of Herakles that is attributed to the Kleophrades Painter.