The Fantasy of the Middle Ages: An Epic Journey through Imaginary Medieval Worlds (Hardcover) 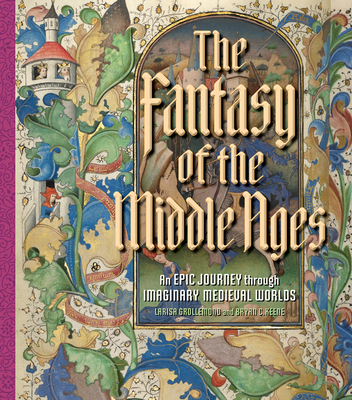 This abundantly illustrated book is an illuminating exploration of the impact of medieval imagery on three hundred years of visual culture.

From the soaring castles of Sleeping Beauty to the bloody battles of Game of Thrones, from Middle-earth in The Lord of the Rings to mythical beasts in Dungeons & Dragons, and from Medieval Times to the Renaissance Faire, the Middle Ages have inspired artists, playwrights, filmmakers, gamers, and writers for centuries. Indeed, no other historical era has captured the imaginations of so many creators.

This volume aims to uncover the many reasons why the Middle Ages have proven so applicable to a variety of modern moments from the eighteenth through the twenty-first century. These “medieval” worlds are often the perfect ground for exploring contemporary cultural concerns and anxieties, saying much more about the time and place in which they were created than they do about the actual conditions of the medieval period. With over 140 color illustrations, from sources ranging from thirteenth-century illuminated manuscripts to contemporary films and video games, and a preface by Game of Thrones costume designer Michele Clapton, The Fantasy of the Middle Ages will surprise and delight both enthusiasts and scholars.

This title is published to accompany an exhibition on view at the J. Paul Getty Museum at the Getty Center from June 21 to September 11, 2022.

Larisa Grollemond is assistant curator of manuscripts at the J. Paul Getty Museum and was a contributing editor for Book of Beasts: The Bestiary in the Medieval World (Getty Publications, 2019).

Bryan C. Keene (he/él/they/elle) is assistant professor of art history at Riverside City College and a former associate curator of manuscripts at the J. Paul Getty Museum. He specializes in codex cultures of a global Middle Ages and fantasy medievalisms.

"This lively and engaging book highlights the key role that visual culture has played in constructing modern (mis)understandings of the so-called Middle Ages. Delightful images of everything from precious antiquities to contemporary film stills support the authors’ insightful analyses. Direct and nuanced engagement with issues around race, gender, sexuality, and other questions of diversity make The Fantasy of the Middle Ages essential reading for anyone curious about how we come to know the material cultures of the past as well as the present.”
—Maggie M. Williams, Executive Director, The Material Collective

“A fascination on every page. This bright and bold exploration of medievalism is not just a collection of stories told and reimagined in every new age, but a rich tapestry in its own right. Inclusive, illuminating, and filled with insight.”
—A. R. Capetta & Cory McCarthy, authors of the bestselling Once & Future series

"Whether you're a storyteller looking for inspiration, an art historian, or simply a lover of beautiful things paying homage to other beautiful things, Fantasy of the Middle Ages is a lush and thoughtful exploration of why this period continues to affect our art today in both obvious and surprising ways.”
—Kiersten White, New York Times bestselling author of the Camelot Rising Trilogy

“With wit and verve, The Fantasy of the Middle Ages explores the perennial popularity of the medieval world in the modern imagination from Tolkien to Game of Thrones. Grollemond and Keene convincingly demonstrate how storytellers of all kinds utilize the rich imagery of the Middle Ages to create an alternative fantasy space, almost a playground, where their own contemporary fears and anxieties can be more safely probed, and paradigms subverted. From the Pre-Raphaelites to Nintendo’s Legend of Zelda, we remain enamored with our own fantasy medieval worlds and the consequences of this infatuation continue to remake and reshape the material culture of the twenty-first century.”
—Kristina Pérez, author of The Sweet Black Waves Trilogy

“The fascination with magic and the Middle Ages has captured imaginations for generations, and ours is no different. Grollemond and Keene take us through the tropes and imagery that first built the fantasy of medieval times and follow it through to our own modern day retellings with vivid illustrations, thought-provoking commentary on the past and current social context, and careful deconstruction of what was truly historical and what has become legend. An intriguing read for anyone who has wondered at the origins of legends like Robin Hood, King Arthur and the Round Table, and the magic and myth of fairies, princesses, wizards, and kings.”
—Jenny Elder Moke, author of Hood

“A lavishly illustrated book full of delights and surprises: King Arthur’s knights, talking animals, music, movies, maps, and Renaissance fairs all make an appearance, alongside insights into race, gender, and sexuality, both in the medieval past and today.  The authors even offer glimpses of vast, premodern worlds beyond Europe and Christendom—in this book, your grandad's European Middle Ages is wholly remade by new ideas and new pleasures in how the past is recovered today.”
—Geraldine Heng, author of The Invention of Race in the European Middle Ages and The Global Middle Ages: An Introduction

“A comprehensive, inclusive analysis of the many ways in which the Middle Ages inform popular culture. . . . Provocative and thorough.”
— Jeana Jorgensen

“By turns informative and captivating, this will enchant historians as much as it will reenactors of the Renaissance Faire stripe.”
— Publishers Weekly

“A vibrant guide to ‘medievalism’. . . . Packed with illustrations, attesting beautifully to the multicoloured – as well as multicultural – splendour of medievalist art. . . . This is a work that opens medieval fantasy up to everyone, regardless of gender, sexuality, race or class. . . . The Middle Ages do indeed emerge from this book as a fantasy, an endlessly imaginative tapestry woven by a million dreamers.”
— James Paz