What Is All This?: Uncollected Stories (Hardcover) 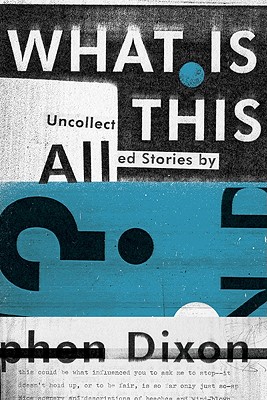 Stephen Dixon is also the literary world's worst-kept secret. His witty, keenly observed narratives and sharply hewn prose have appeared in every major market magazine fromHarper's to Playboy and have earned him two National Book Award nominations--for his novels Frog and Interstate--a Guggenheim Fellowship, and the Pushcart Prize. He has also garnered the praise of critics and colleagues alike; Jonathan Lethem (Motherless Brooklyn) even admits to "borrowing a jumpstart from a few lines of Dixon" in his own work. In all likelihood, many of the students who have passed through his creative writing classes at Johns Hopkins University have done the same. Fantagraphics Books is proud to present his latest volume of short stories, What Is All This? The tales in the collection are vintage Dixon, eschewing the modernism and quasi-autobiography of his I trilogy and instead treating us to a pared- down, crystalline style reminiscent of Hemingway at the height of his powers. Centrally concerning himself with the American condition, he explores obsessions of body image, the increasingly polarized political landscape, sex--in all its incarnations--and the gloriously pointless minutiae of modern life, from bus rides to tying shoelaces. Dixon's stories are crafted with the eye of a great observer and the tongue of a profound humorist, finding a voice for the modern age in the same way that Kafka and Sartre captured the spirit of their respective epochs. using the canvas of his native New York (with one significant exception that affords Dixon the opportunity to create a furiously political fable) he astutely captures the edgy madness that infects the city through the neuroses of his narrators with a style that owes as much to Neo-Realist cinema as it does to modern literature What Is All This