What Is All This? (Paperback) 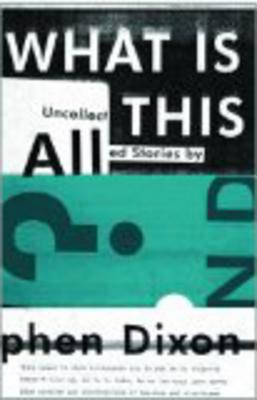 A massive tome from one of America's greatest living writers.

Stephen Dixon’s work has earned him a Guggenheim Fellowship, the American Academy Institute of Arts and Letters Prize for Fiction, the O. Henry Award, and the Pushcart Prize. Fantagraphics Books is proud to re-present his 2010 hardcover collection of short stories, What Is All This?, in paperback form.

Dixon’s finely chiseled sentences cut to the quick of people’s lives. None of these stories have been collected in any book before; they have appeared in a wide variety of literary journals over almost 40 years and Dixon has entirely rewritten all of them. Dixon admirers will be cheered to learn that these stories comprise a wholly original work.

Centrally concerning himself with the American condition, Dixon explores obsessions of body image, the increasingly polarized political landscape, sex — in all its incarnations — and the gloriously pointless minutiae of modern life, from bus rides to tying shoelaces. Using the canvas of his native New York he astutely captures the edgy madness that infects the city through the neuroses of his narrators with a style that owes as much to Neo-Realist cinema as it does to modern literature.

The softcover edition of What Is All This? will again be designed by award-winning Art Director Jacob Covey, whose hardcover design was honored as one the industry’s 50 best books/covers of the year by AIGA.

Stephen Dixon was born in 1936 in New York City. He is a former professor of creative writing at Johns Hopkins University and still hammers out his fiction on a vintage typewriter. He is also a two time National Book Award nominee — for his novels Frog and Interstate.

Dixon’s stories, strengthened by their unity, almost have a novel’s ability to develop character, to suggest a life outside the confines of the plot.
— Boston Globe

This mammoth collection presents five decades of Dixon: sex, frustration, and attempts at deeper communication, mostly missed. There are echoes of Ernest Hemingway and prefigurings of Raymond Carver’s lower-middle class minimalism infusing tales of scrappers and scrapers... these stories are a testament to an impressive career spent too much under the radar.
— Publishers Weekly (Starred Review)

Some writers are able, in a mere 200 pages or so, to rewire your circuitry in a way that makes you unfit for your own life. Stephen Dixon is such a writer, and he can do it in a short story as well.
— The Los Angeles Times

Mr. Dixon wields a stubbornly plain-spoken style; he loves all sorts of tricky narrative effects. And he loves even more the tribulations of the fantasizing mind, ticklish in their comedy, alarming in their immediacy.
— The New York Times

There is no better chronicler of our antic and anxious age than Stephen Dixon.
— Daniel Handler (aka Lemony Snicket)

Stephen Dixon is one of the great secret masters — too secret. I return again and again to his stories for writerly inspiration, moral support and comic relief at moments of personal misery, and, several times, in a spirit of outright plagiaristic necessity: borrowing a jumpstart from a few lines of Dixon has been a real problem-solver in my own short fiction. Please read him, you.
— Jonathan Lethem