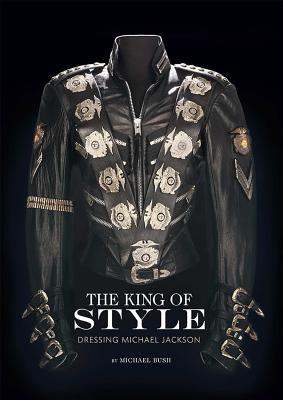 The King of Style: Dressing Michael Jackson is a fascinating look at the intersection of music and fashion, as well as an homage to Michael Jackson’s brilliant fusing of costume, personality, and performance to create his iconic image.

Through his music, dance, and fashion, Michael Jackson created a mystique that was unique to him and recognized as such throughout the world. For five decades he mesmerized audiences—and for twenty-five of those years Michael Bush was there as Jackson’s designer, stylist, and friend, accompanying the King of Pop on his journey to becoming the King of Style. While paying homage to the original Billie Jean, Beat It, and Thriller looks that put Jackson on the fashion map, The King of Style also traces their evolution over several decades. Jackson’s penchant for the military silhouette is explored in detail, along with the trade secrets behind the sequined glove and the fencing uniform that he, Michael Bush, and Dennis Tompkins reinvented to make stage magic. It was Bush who dressed Jackson for the final time, before he was buried. Dozens of garments were left unfinished by his shocking death. The legacy of Michael Jackson lives on. An artist like none other, he transformed everything he touched—from the fabric of his clothes to his legions of fans around the world.

Michael Bush worked personally with Michael Jackson for 25 years to create some of the most original and indelible clothing ever worn by a musical performer. Using his professional background in theatrical costume construction and dance, they created thousands of custom artistic pieces that captured the essence of a one-of-a-kind pop star. He lives in Hollywood, CA.