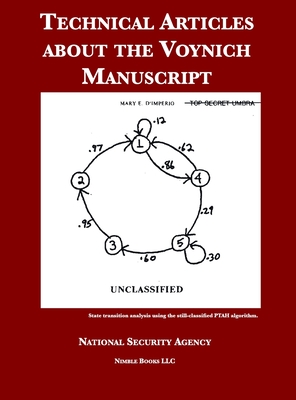 By National Security Agency
This item is not available.

This volume contains four articles written by personnel of the National Security Agency (NSA) about the Voynich manuscript from 1965 to 1978.

The first essay, by Brigadier John Tiltman, is entitled "The Voynich Manuscript: The Most Mysterious Manuscript in the World" and was presented to the Baltimore Bibliophiles in 1967. It provides a basic summary of facts about the manuscript and its provenance and adds a survey of proposed solutions, most of which it dispenses with quite quickly. I found it interesting to discover that Tiltman was first introduced to the Voynich ms. by William Friedman, founder of the NSA, in 1947 ( ) I was also intrigued that Tiltman's scholarly research into the history of medieval herbalism included consultations with leading English academics, no doubt during visits on "Five Eyes" business.

The second essay, originally classifed Top Secret Umbra, is "An Application of PTAH to the Voynich Manuscript" by Mary D'Imperio - the title itself was unclassified. A few pages in, I came to a full stop when I encountered this:

"PTAH (named for the Egyptian god of wisdom), is a general statistical method developed at IDA (Institute for Defense Analyses), Princeton University. PTAH got its name when a programmer. Mr.Gerry Mitchell, was listening to the opera "Aida" while working on his program. He was struck by the passage "immenso Ptah noi invociam," and named his program after the Egyptian god. The name was ultimately extended from this program, implementing a particular application of the method, to the method and its mathematical theory as well..."

D'Imperio used PTAH to analyze the Voynich manuscript and similar works and concluded that "I find the above comparisions quite convincing support for a view that the Voynich text, regarded as a string of single letters, does not 'act like' natural language. Instead, it exhibits a clear positional regularity or characters within words. I believe that these findings strengthen the theory of Friedman and Tiltman that an artificial language may underlie the Yoynich text."

Government interest dating back to 1947 ... pharmacology unknown to modern man ... artificial languages ... the movie "ARRIVAL" based on Ted Chiang's "Story of Your Life" ... hmmm ...

The third essay, also by D'Imperio, is "An Application of Cluster Analysis and Multidimensional Scaling to the Question of 'Hands' and 'Languages' in the Voynich Manuscript." She uses cluster analytic techniques to examine findings by Captain Prescott Currier, who suggested that the manuscript's pages can be clustered into groups of multiple authors and styles. D'Imperio's discussion includes warnings that are still sound today: " The interpretation of cluster analysis results is unavoidably circular; we propose a certain structure in the group of objects under study, we perform the computation, and we are happy if we see what we expected, or at least something that makes sense in terms of our original hypothesis, however revised."

The fourth and final essay, by James Child, takes an important step forward by proposing that "the Voynich Manuscript does not contain an artificial language nor the enciphered text of an underlying text in an unknown language. but is a text in a hitherto unknown medieval North Germanic dialect."

People who enjoy works like THE DA VINCI CODE, PUZZLE PALACE, and Snowden will find this fascinating.